Everyone wants to slow the aging process.  No matter who you are, your current age, or where you are in your health right now, figuring out how to slow down the clock to the end of your life is a big deal to all of us.

To slow it down, you must first understand the basics of why and how we age.

Human beings are extremely long-lived mammals but we have the genetics to live far longer.  As of 2017, in the United States, the current life expectancy estimate for males is 79 years.  The estimate is 81 years for females.

These numbers fluctuate further depending on the state you live in and they fluctuate drastically from country to country.  Per the World Health Organization, the average life expectancy around the globe is 71 years (factoring in all races and genders).

This is the number most significantly affected by environment, injury, diet, and lifestyle habits.

Living to 80, 90, 100, and beyond isn’t such a good thing if you’re sick or in pain.  However, if you are healthy, happy, and still sharp…why wouldn’t you want to live as long as possible?

A Chinese man named Li Ching-Yuen (also written as Ching-Yun) was said to have lived to be 256-years-old, dying in 1933 (his obituary appeared in the New York Times).  I’ve written about him before but I want to share the advice he once imparted to a warlord.

Modern science and holistic medicine are on the same page here.  In the pursuit to slow the aging process and fight disease, the guidance is sound.  Mr. Ching-Yuen’s words translate to avoiding stress, sidestep inflammatory over-exertion, get regular exercise, and get plenty of sleep.

To Slow the Aging Process – Slow Your Heart Rate

To lower your heart rate, you need to follow Mr. Ching-Yuen’s advice with a few extras such as removing stressor foods, losing the inflammatory sugars in your diet, quitting smoking, and getting rid of other habits that are gunking up your works!

The Years Don’t Kill Us – Disease Does

As I mentioned, humans are long-lived but we’re genetically capable of living much longer.  Our average years of life are getting longer but our healthy life expectancy is horrible!

As the wealthiest nation in the world, with the massive medical complex we’ve created, and the education afforded to the population – why aren’t we living longer?  Just about every expert in the field agrees that the answer is chronic stress.

Most commonly, it is bronchopneumonia that claims the very aged.  They make it 100 years – beating statistic after statistic regarding diabetes, heart disease, or cancer – to fall to a germ. 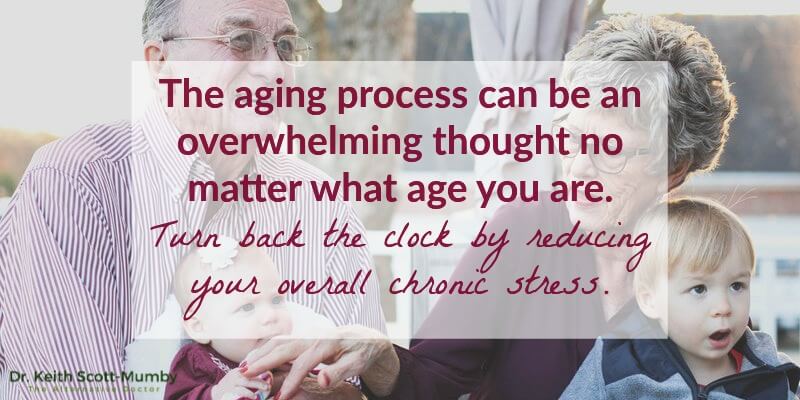 To slow the aging process, you need to be acutely aware of three things:

Almost all disease is reversible.  Your body has the ability (and the will) to repair damage if you give it the chance and the raw materials it needs to do the work.

You don’t have to accept the breakdown of your body as “part of aging” because it’s not!

Right now, you can experience a complete life renewal, increased vigor, mental clarity, and sexual pleasure by learning to slow the aging process and even turn back the clock in many ways.

Dr. Walter Pierpaoli and Dr. William Regeleson said it perfectly in their book The Melatonin Miracle: “Ours is the first generation that need not experience the dismal physical decline now associated with old age.  We are the first generation that need not resign ourselves to accepting the fate that our later years will be filled with debility and disease.”

Here are some of the biggest concerns we face in the next decade.  I’ve addressed these repeatedly over the years and it can be frustrating that there is so little done on a massive scale to correct the problems!

It is possible (truly!) to slow or turn back the clock!

Understanding how the human body works, why we age, and learning the methods that can repair (and even reverse) damage already done have already been discovered.

To get a more in-depth look at what you can do to slow the aging process, read my book “How to Live Beyond 100 Years (and Stay Healthy in Mind and Body)” right now.  I’m going to give you all the tools you need to age successfully.

It is never too early – or too late – to alter your healthy life expectancy!