According to an article on PubMed, tea is one of the most popular beverages in the world, consumed by over two-thirds of the global population.

We all know about black tea variants: Assam, Darjeeling, Earl Grey, Ceylon, English Breakfast Tea… these are made by roasting and flavoring leaves from a single evergreen plant, the Camellia sinensis bush. Green tea is from the same shrub. So are gunpowder (a variant of green tea), cha, oolong and Lapsang Souchong (very smoky).

Viv and I were lucky enough to live in what is now Sri Lanka for a couple years. Formerly the British colony of Ceylon, Sri Lanka was, and has very much remained, THE territory for Camellia teas. In the high mountains above the ancient capital of Kandy, around Nuwara Eliya, the cool climate and morning mists, sweetened by not one but TWO monsoon seasons a year, there is nowhere else on earth quite like Ceylon/Sri Lanka for tea growing. 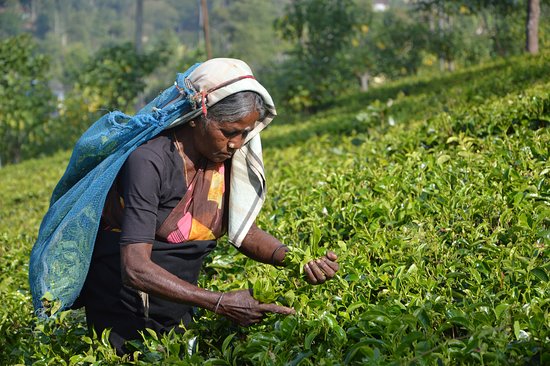 The British have loved tea for centuries. “Afternoon tea” in places similar to the imaginary Downton Abbey (real-life Highclere Castle) was quite a ceremony; not just cups of tea but cucumber and mint sandwiches (brown bread, lightly smeared with best butter of course), smoked salmon, clotted cream, jams and other preserves, watercress, cakes, cheeses, and even meats; basically just whatever the hostess saw fit! 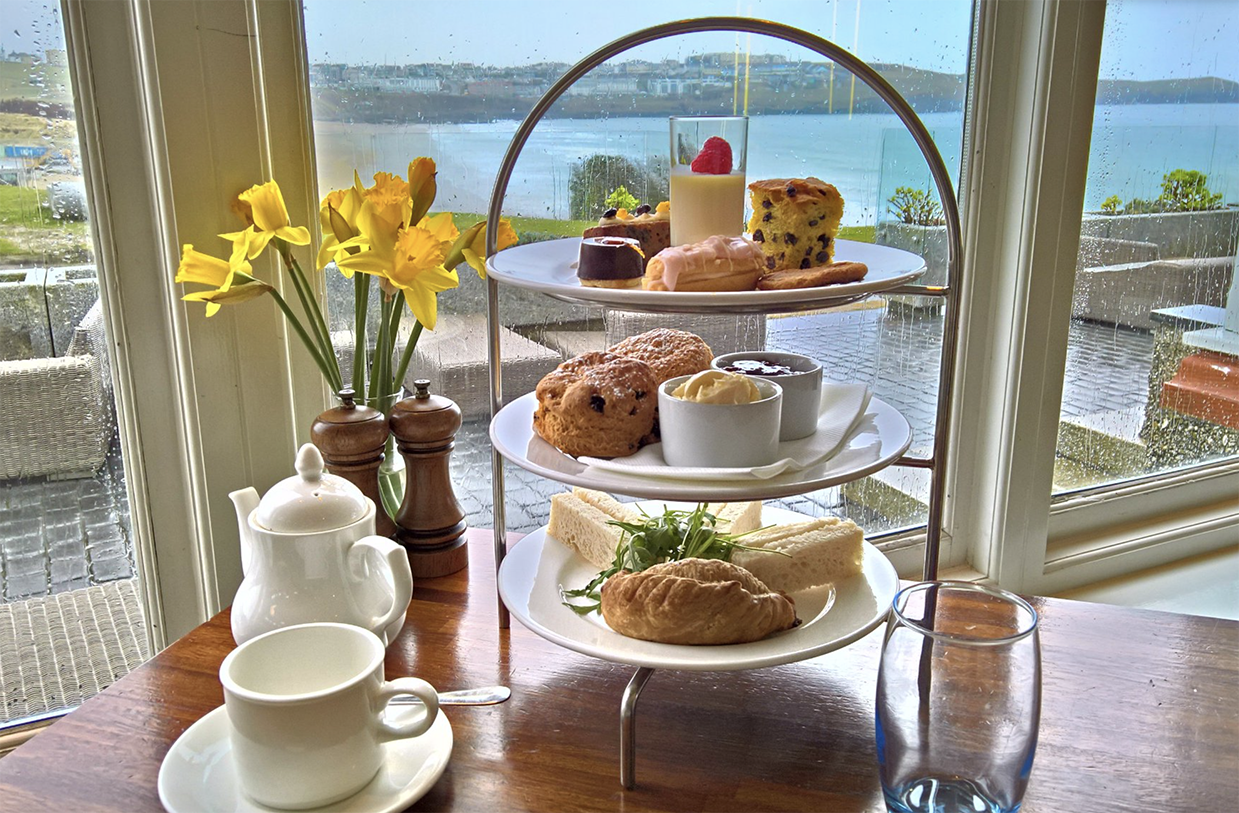 Afternoon tea at the Headland Hotel, Newquay, Cornwall, not a mile from where I am sitting typing this!

There might be some medico-scientific reasons why these teas were so popular for so long (and still are!) They contain caffeine. Not as much as coffee but enough to act as a perk. Then, paradoxically, Camellia teas also contain quite a lot of L-theanine, which is a superb relaxant. You’ll find it in my sleep formula.

Numerous other active compounds include polyphenols, amino acids, organic acids, caffeine, vitamins, etc. and green tea especially has polyphenols, catechins and theaflavins. The most famous catechin is Epigallocatechin gallate (EGCG), also known as epigallocatechin-3-gallate, which we think has powerful antioxidant properties and even anti-cancer benefits.

Many of the active ingredients in tea have been intensively researched in recent years. Today there are thousands of studies on the contents and effects of green tea in particular, which have shown the exceptionally positive effects of tea on health. In spite of this, the majority of the 200-250 significant secondary plant chemical compounds and 360-400 essential oils of green tea are yet to be fully discovered or remain misunderstood.

The pleasure of life today, of course, is that we are not confined to classic tea. We have what are generally known as herb teas though some, like linden (aka. tilleuil and lime, not related to the citrus fruit of that name) and pine bark, are from trees, rather than herbs.

Some herb teas are drunk purely for their flavor, such as peppermint, tulsi (holy basil) or rooibos (sometimes spelled rooibosch, it means “red bush” in Afrikaans). I used to enjoy it many years ago but suddenly developed an extremely violent food allergy reaction to it and had to stop.

However many herb teas are drunk, not for their flavor, but because of some real (or imagined) health benefit.

Chamomile is drunk as a sedative and a sleep draft at bedtime. It may not just be useful as a sleep aid but is also believed to have antibacterial, anti-inflammatory and possibly liver-protecting effects.

Vervain tea has long been believed to have a calming effect that can help relieve stress and promote sleep. This effect was first described in the 1652 book “The English Physician” in which vervain was used as a tea to treat “over-enthusiasm”… that’s a cute way to describe anxiety and agitation states!

Vervain’s medical use is traceable back to an 18th-century book “Sauer’s Herbal Cure,” where it was said to aid in the treatment of kidney stones. In fact, according to Very Well Health, the name “verbena” is believed derived from the Celtic word ferfaen meaning “to drive away stones.”

Vervain regained popularly in the 1930s as one of the 38 classic plants used as a Bach Flower Remedy, variations of which are still sold today.

NOTE: Vervain should be avoided in people with kidney disease. It contains a psychoactive sugar called verbenalin, which can irritate the kidneys.

Shepherd’s Purse is very beneficial for cases with hypertension, heart and circulatory problems including mild heart failure, low blood pressure, and nervous heart complaints. It is also used for headache, vomiting blood, blood in the urine, diarrhea, and bladder infections. Scientific name Capsella bursa-pastoris, it is in the brassica family and thus related to cabbage and broccoli! That explains why the flavor will never catch on (it’s not bad… but cabbage water?)

Lemon Balm is another garden herb that is famously calming and soothing. It may also help create more elastic skin, which is good for us Boomers! It is said to improve memory and even math processing skills. Sudoku addicts take note!

Echinacea enjoys a healthy position as an immune booster though I must state that I have never seen anyone beat even a common cold by taking it! It probably doesn’t deserve its reputation. Still, it’s popular and readily available. Try it and see if you like it.

Sage. Sage is a biggie in my book. Sage tea is well known for its medicinal properties, and scientific research has begun to support several of its health benefits, especially for brain health. It may even help with Alzheimer’s disease and cognitive impairment.

A number of studies found improvements in mood, mental function and memory in healthy adults after they took one of several different types of sage extract. You can cook with it as well!

Ginger Tea. Ginger is anti-inflammatory and that is GOOD news. We all age with inflammation. Reduced inflammation benefits pain, joint stiffness, Alzheimer’s and weight loss. In addition, ginger has been shown to combat the nausea of chemotherapy. That’s a clear message from the Cosmos!

All these teas are easily consumed in packet form or tea bags, which are readily available from online and street corner stores. That’s easier than trying to measure and prepare your own. 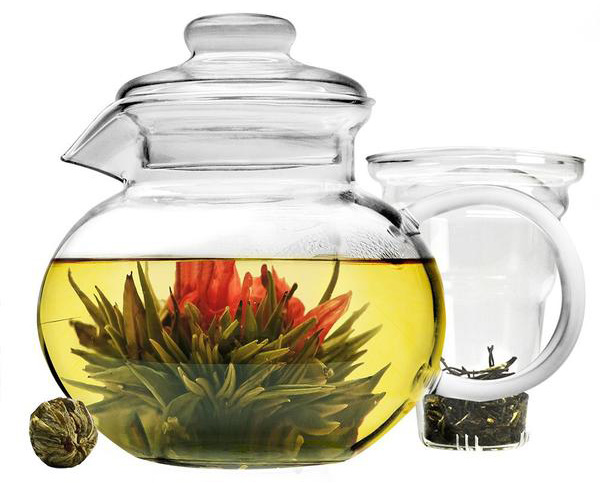 There is life beyond the old-fashioned “pot of tea”. Get busy experimenting and testing. Taste is king… but health benefits of any kind are welcome. Remember, tea has zero additives and zero calories. That’s good!