The Flu Season Is Upon Us

The strain and severity is new. However, the lies, hogwash and fraud are the same as ever…

The push is on to get everyone vaccinated. Never let a good scare story go to waste seems to be the Big Pharma motto, empowered by their lying cronies in the news media.

Why bother though? They have already officially admitted that this year’s flu vaccine (as every year) is pretty worthless. It’s propped up by fake science and phoney statistics.

But this year, they have been caught by the wrong strain (H3N2, an unusual form of influenza A) and have been forced to admit their vaccine only 10% effective! Nevertheless, you should get the vaccine anyway scream the slogans.

Why? Would you take a dangerous opiate if there was only a 10% chance it would relieve your pain? (or only reduce your pain by 10%, for all that risk of misery and death?) And let me tell you, the 10% estimate is way too high. It’s to try and save face; they can still pretend it isn’t a total useless product.1 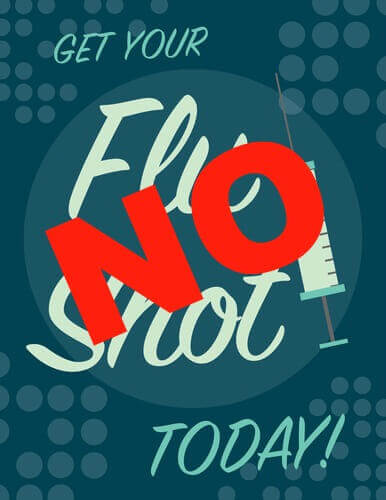 And by the way, the 10% figure is only a “preliminary estimate”. It could be much lower when the facts are in (if we ever allowed to share the true facts: don’t hold your breath).

Flu vaccination is a classic science fraud, perpetrated by the WHO, CDC and governments all over the world.

Vaccine effectiveness typically ranges from 40 to 60 percent in a good year. Preliminary estimates from last year show the vaccine was 40 percent effective in the U.S., similar to 2014-2015.

Concerns have been raised about this year’s vaccine after an editorial published in the New England Journal of Medicine last Thursday said it was only 10 percent effective against H3N2 in Australia.

cautions against using this statistic to predict how well the vaccine will work in the U.S., since this is not official CDC data, but warns it could be a bad sign.

See, the current US-version of the story hasn’t been got at and massaged by the CDC, to make Big Pharma look less incompetent. Meantime, people are suffering everywhere. I have a friend living nearby who was so incapacitated, Vivien and I had to take him soups and juices to live on, till he can look after himself.

The good news, spouts ABC News, is that “This year’s flu seems to be quite susceptible to the available flu medications, like Tamiflu, also known as oseltamivir.”2

Oh Yeah? Did anyone ever tell you that Tamiflu is very dangerous? According to the website VaccineImpact.com Tamiflu has nasty side effects not being communicated to the public. 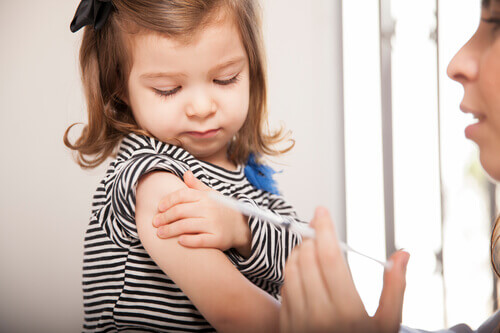 Local CBS news affiliate DFW in Dallas, Texas, has reported the story of a 6 year old girl who was given Tamiflu and suffered horrible hallucinations, allegedly trying to kill herself:

Like so many others, the 6-year-old’s flu diagnosis came with a choice: whether or not to take Tamiflu to speed up the course of the dreaded illness.

The family from Allen, who wants to remain anonymous, says the side effects were stunning: hallucinations, running away from school and an attempt, they believe, to hurt herself.

‘The second story window was open, which is in her bedroom, and she used her desk to climb up onto it, and she was about to jump out the window when my wife came up and grabbed her,’ her father said.3

It is written in the fine print, there’s always a chance of a side effect with any drug. The little girl’s parents say they wish they had known.

‘I don’t think the 16 hours of symptom relief from the flu is worth the possible side effects that we went through,’ her father said.

As is usual with most corporate “mainstream” media stories regarding anything negative about a pharmaceutical product, the report included testimony from a doctor assuring the public that such side effects are very rare, and that the drug is very safe.

Here are some more stories, posted as comments from the article posted on the Dallas-Fort Worth CBS site: (Put in individual block quotes)

My husband suffered from hallucinations attributed to Tamiflu last year after he was hospitalized for flu with pneumonia (despite getting a flu shot). He had been prescribed the drug after being discharged from the hospital. We called the pharmacist who was already aware of this as a side effect, as was the doctor who prescribed it. No one had mentioned this fact to us. He discontinued taking it immediately, but this is not a sudden discovery. – Vicki Lore Foley

I almost died from Tamiflu in 2013 after developing TTP [Thrombotic Thrombocytopenic Purpura], which is rare and almost always fatal blood disorder. For 5 days, in the ICU, I had to have blood transfusions and complete plasma transfer. I barely made it. TTP has a 95% morality rate. The Wisconsin Blood Center (a leading authority) studied my case for months to find a cause. I took Tamiflu and in 36 hours I was deathly ill. The doctors at laying the cause for my sudden illness at the feet of Tamiflu. Don’t take it! It does not help that much. My treatment and hospitalization was $48,000.00 for 5 days. – Allison Wiggins

The hallucinations are more common than 1%. My son had them. It is beyond frightening. “The voices, make them stop!” “Don’t let them hurt me!” Tamiflu is subjecting your child to a real life horror movie. What’s even worse, the hallucinations recurred for weeks following our immediate ceasing of the use of the drug. THIS IS REAL. Japan has banned TamiFlu after several children plunged to their deaths off high rise balconies or stepped into traffic attempting to escape the hallucinations. NEVER, NEVER administer this drug to your child. Tamiflu is not a cure. You’re risking subjecting your child to weeks of nightmarish torture for the convenience of lessening flu symptoms for a couple days. Don’t do it! – Davy Lane

I took that stuff once when I got the flu (after having a flu shot). Ended up vomiting for days and developed pneumonia. – Tracy Christine4

The Trouble Has Long Been Known And Ignored

Recognizing that Tamilfu is hype, not science, isn’t new. Even prestigious Forbes magazine attacked it in 2013, insisting that scientific evidence did not support the manufacturers claims for efficacy and safety. [Well, let’s be ABSOLUTELY ACCURATE: it did shorten the average duration of flu symptoms by less than a day: 16.8 hours, to be precise].

When approached for more of the data on which claims were made, Roche refused to cooperate.

There remains substantial uncertainty about whether this drug is worth taking. Meanwhile, it is worth asking – why is [Roche] unwilling to share the information they have? And should doctors keep prescribing medicines when some potentially vital information is being kept out of view?5

It’s worse. a Cochrane review concluded: benefits of anti-viral flu drugs do not outweigh the risks.

The Cochrane Collaboration is considered to be the gold standard in evidence-based reviews. Previous versions of their review on anti-viral flu drugs revealed unresolved discrepancies in the published trials, including ‘substantial publication bias.’ While there were numerous studies on the topic, only a limited number had been published.

As a result, the Cochrane Collaboration turned to a more reputable source of data: complete clinical study reports. These are ‘unpublished, extensive documents with great detail on the trials that formed the basis for market approval.’

Until recently, these documents were only available to manufacturers and regulators, but, after a four-year effort, including a Freedom of Information suit, the researchers were able to assess these regulatory documents (all 160,000+ pages of them).

What they found was that the evidence does not support industry claims that these drugs (Tamiflu and another anti-viral drug Relenza [zanamivir]) lower the risk of complications such as pneumonia or that the benefits outweigh the risks. In other words, the official propaganda is just lies.

Indeed, Dr. Tom Jefferson, who led the study, noted, ‘I wouldn’t give it [Tamiflu] for symptom relief…’6

Have Dr. Keith’s Own® Super C standing by. Take 4 scoopfuls a day if symptoms do emerge. 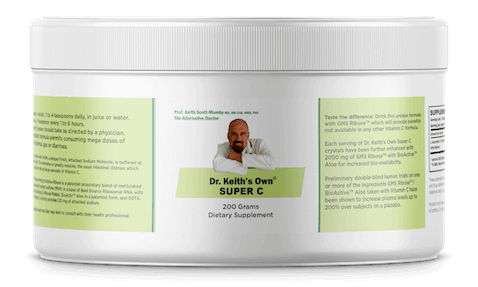 Eat really carefully, no sugar, dairy or grains; no junk; no alcohol; organic is best and get plenty of sleep. It’s best to avoid public places, so no bars and restaurants. And if you can, avoid flying. The air in plane cabins is a summation of everyone’s expired air!

Stay well, summer is on the way!