I’m not quite sure why early “masters” are so-called. Some of their paintings are gruesomely bad; all wrong anatomically! But Piero della Francesca was a man before his time. Art historian Sir Kenneth Clark attributes to him “the greatest small painting in the world”. It’s the Flagellation of Christ, hanging in the National Gallery in the ducal palace in Urbino, Italy.

I went to see it yesterday. Here’s proof: I’m standing next to it! 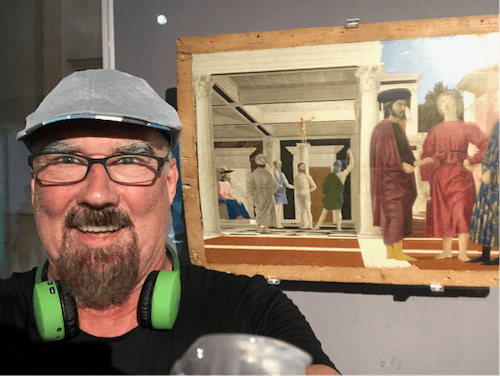 Thing is, it’s in bad shape. The painting is oil and tempera on board and woodworm is chewing away at it, plus the board is now extremely buckled (see close up). It’s not going to last much longer. 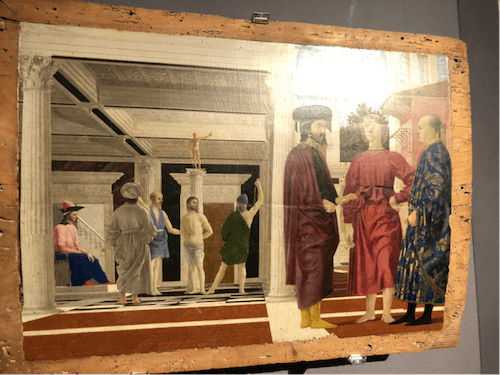 Now to me it’s not the greatest painting ever but it’s the most intriguing by far. Who the hell are these guys? NOBODY KNOWS!

Even more weird is: who is the creep in the pink jacket and fancy-nancy hat watching the flogging? It could be Pontius Pilate but there aren’t many takers for that!

Some think the whole painting is really symbolic and depicts the thrashing of Christianity by the Turks, which was going on at the time. This was painted only 20 years after the fall of Constantinople (around 1455). The dude in pink is then supposed to be the current Pope, who was widely regarded as a useless wimp and would not mount a Christian counter-crusade.

I’m not here to re-cycle all the intrigue, but one last thing: the light for the left-hand portion is from the right, whereas the lighting for the three foreground figures is from the left! That adds some weight to my own idea, which is this could have been painted by two different artists. There’s a slight difference in perspective between the two halves, agreed? I’m very struck by how much more skilled the three figures on the right are. Maybe della Francesca just over-painted part of someone else’s work?

Aha, I hear you ask. What has this got to do with health options?

What about beauty? I once planned a book on the health benefits of beauty and esthetics. It still hasn’t been written.

But let me just say that the rest of art at this period was almost entirely Madonnas with funny boobies and gory crucifixions; not my idea of beautiful!

I suppose we could use it as a starting meditation about taking care of yourself long-term—you know: no woodworm and stuff! That’s always a good lesson.

The fact is we are all beautiful in a way when young. It’s hard to preserve it as we age. Women I feel very keenly for; they fight against aging with great anguish. There’s a cruel idea that older women lack beauty, whereas an older man looks “distinguished” (or so I’m told).

It misses the point entirely, which is that beauty is mostly an attitude of mind. I learned this very early on, at med school in fact. I remember particularly well one very beautiful women in her early thirties; full-figured; and, yes, gorgeous and sexy. She was in for a minor surgery.

What struck me so vividly was that the moment the anesthetic hit, her looks vanished, like a deflated balloon! I realized right then that beauty was about how a woman carried herself, what she thought of herself, and the expression she habitually wore, to face the world. Once she was unconscious, she couldn’t DO beauty!

It’s only a very small hop from there to understand that we create ourselves continuously. But we need good nutrition to do it. You can’t build a tower with crummy, crumbly bricks!

It’s said that we replace ourselves entirely every 90 days or so (statistically speaking, anyway). How is that going to happen if we don’t have good replacement materials? It can’t.

Here’s my point: No-one will cure anything to last, no matter how brilliant you are, or what healing paradigm, if the patient is in a negative nutritional balance.

So nutritional literacy is an important life skill. How is it then that almost nobody knows the simple bullet points of nutritional science, not even most health practitioners? Let’s review the key points:

OK, off to Rome tomorrow, The Forum, The Colosseum and The Palatine Hill (not doing the Vatican this year)

To your excellent health and unrivalled artistic good taste!