Whatever happened to loving patient care? When I was a med student and later an intern (they call it “houseman” or “house officer” in the UK), we didn’t have a fraction of the fancy-nancy technical and chemical treatments available that exist today.

To some, this is “progress” and I’m not against new developments. But it seems to me that the simple things have been lost in the haze and confusion. The patient has now become almost a supernumerary! He or she is “in the way” of important work to be done. There are tubes, pills, enemas, trolleys, endless x-rays and endless staring at the MRI scan screens to be carried out.

We haven’t time for the damned patient and his or her fads!

Certainly there is little or no time to see he or she is comfortable, less fearful, assured and calm.

Images like these are more often than not just advertising puff, rather than real

More drugs, more science, more labs, more tests, is the cry. It’s a kind of techno frenzy. Everything is made worse by the fact there is little time, in truth, to spend with each patient. In the doctor’s office, time is often down to a few minutes. Sometimes a VERY few minutes…

Certainly no time for good old-fashioned TLC. The patient doesn’t need TLC, the doctors and nurses think: he/she needs such and such a drug or such and such procedure. Just talking to the patient is a waste of time. It’s the first thing to go out the window.

Why bother? Only the “treatment” is going to fix him or her.

Well, that shows a laudable—but highly misguided—reliance on what they consider to be the “correct” treatment, or at least the generally-agreed treatment. It’s got to the stage where doctors don’t even LISTEN to the patient. “What does he or she know?” That’s very arrogant and, again, foolish. The patient is the source of all knowledge, whether it’s something he or she describes, or a test carried out on the patient’s body.

I don’t think doctors think of the patient as the center of action any more. Their labs and THEIR ideas and opinions are what really count. The patient is just a name and a case number.

It has reached the point where doctors are verbally abusive to their patients. I have to say this is, regretfully, largely a phenomenon in the USA, where every doctor is in a rush to grab as many dollars as possible, before the lights go out!

Patients can be so difficult! They want your time, they want answers, they want to “discuss” their case, for Gawd’s sake! Who puts them up to these jumped up ideas? Those damned chiros and osteopaths, no doubt.

[Don’t write to me! I’m making up dialogue to illustrate my point!]

I have countless reports of patients being shouted at when they express reservations about suggested treatment. This becomes particularly acute when discussing cancer treatments. The business model is to corral the patient, heighten their fear, create urgency and demand a quick commitment.

They don’t like hesitation. It gives the patient time to think things through! Maybe he or she might even change their mind, or refuse to become a cash cow… Ooops, sorry, a quiet obedient chemo patient.

Getting engaged, talking things through answering questions, being reassuring instead of demanding and threatening, cuts completely across this business model.

Consider this report I received from a nice lady called Susann:

In 2016, after the death of my daughter and best friend, events caught up with me and I had a “cardiac event” sending me to the Heart Hospital. I was thrown into Western Medicine after 30 years of choosing alternative and holistic health care.

My almost 2 years was searching for a cardiologist to assist me in keeping an eye on things – I fired 5 before I found one that would “co-create” a healing plan with me and allow me to work with Holistic 1st. I knew he couldn’t “advise” me and that was okay – I was my own “advisor” – I just needed him to know. I wasn’t there to ask his permission – just make him aware of what I was doing and why.

I had not 1, but 2 physicians literally get in my face and SCREAM at me because I refused statins – I had already done my due diligence and researched statins. One cardiologist (when I attempted to talk to him about alternative methods that I had read up on) not only dismissed me but said and I quote (you don’t forget things like this) – “WHEN YOU GET ANOTHER HEART ATTACK – AND YOU WILL! DO NOT COME CRYING TO ME!” 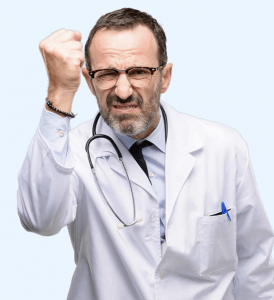 Yet another literally got up from her chair and into my face and screamed – (yes – screamed) YOU’RE GOING TO DIE! DO YOU UNDERSTAND ME? YOU’RE GOING TO DIE!!! Not once, not twice but 3 TIMES upon which I just got up and walked out. I ended up with an anxiety attack from her verbal battering and yes, I did report her.

One cardiologist told me when I shared with her the side effects of a Beta Blocker & ACE Inhibitor she had me on – I couldn’t even take a shower without getting out of breath – walking to the car a short distance to my office door had me stopping twice to catch my breath – I researched the meds – “side effects include” – she said to me “No it ISN’T the medication – “I have a patient on this that plays tennis every week and he’s FINE!” –

Really? Dismissed – again – that was Cardiologist #5. By the way, I stopped the med and regained my capacity to walk and breathe without feeling as if I was going to pass out from extensive wheezing.

Well I found one who was kind enough to listen – allowed me to follow my own healing path and a subsequent follow up catheterization and echo showed – not only could he NOT find any issues – he had to look at the notes of the “event” to see where the damage was on that fateful day – he couldn’t. So he said he was “there for me” but whatever it was I was doing – keep it up.

I went on KETO, have done Intermittent Fasting and Extended Fasting (Autophagy) and did a lot of emotional work because healing truly is a “Mind, Body, Spirit” process – and within a few months of being “allowed” to follow my own path with extensive research – all my labs came back within normal range. I am still working on some other issues as a result of all this – but the drugs they put me on after this event did more harm than good.

So, Dr. Keith, today I follow physicians like you who are trained in the “Western” medical model but who have taken it a step further into a more Holistic approach. I keep files handy to refer to them when something pops up and I SO appreciate those who are braving the status quo and I do see it as bravery because I know what Big Pharma and the AMA does to those who “don’t toe the line.”

Just wanted to share my appreciation for your choice in helping people.

I wonder how many of you have had experiences with orthodox doctors as extreme as this?

Not many, I hope. Feel free to write if you want.