The Dangers of Energy Drinks Revealed

Energy drinks have gained incredible popularity in the last few years. We live in a sleep-deprived world that increasingly expects longer hours or greater production.

The lure of “miracle” energy is strong. However, energy drink dangers should not be ignored.

Second only to vitamin supplements, and heavily marketed to young people, they promise a boost of “energy” in the form of massive amounts of caffeine. They claim to improve mental alertness, mental performance, and even physical preparedness. Sales of these products are growing faster than all other drinks in the United States.

Are these beverages as good as they claim?

The copious levels of caffeine do nothing for your physical performance. While some studies prove that caffeine in moderation does help make you more alert, too much caffeine is bad for your health.

On the low end, some of these goods contain 80mg of caffeine – still triple the amount found in a cup of coffee. Others have tested higher than 500mg each! That’s more than six cups of coffee.

That’s only accounting for the caffeine added. There are other ingredients that also contain caffeine that increase the overall total substantially.

The recommendations from the American Academy of Pediatrics cautions against children or young adults consuming more than 100mg per day.

Now, imagine you’re also drinking coffee or caffeinated soda. Things can get out of hand quickly. Another huge issue is the sugar content.

Researchers are now studying the effects of these beverages on young people with mood or behavioral disorders. If you have an existing heart condition, they can worsen the problem drastically. There have been several cases of caffeine toxicity that link to the consumption of dangerous energy drinks. Athletes run the risk of severe dehydration since the ingredients in these products have a diuretic effect.

You might not know you have a problem until it’s too late. In 2009 alone, more than 13,000 visits to the emergency room were attributed to energy drinks. Since their explosion onto the market, there have been 13 direct fatalities for one product that was investigated as part of a lawsuit. There is literally no way to tell how many there are across the industry.

Patients present with symptoms that can be misdiagnosed and treated incorrectly. Adding to the confusion is that energy drinks aren’t a controlled substance so tests aren’t done for them and patients might not mention a beverage they drank.

Anyone can buy these drinks. There are no restrictions or limits.

There have been numerous complaints that the manufacturers don’t bother to warn their consumers of the dangers of energy drinks. Young people are particularly susceptible to the marketing campaigns.

I estimate a lot more problems in the coming years because the manufacturers of these drinks show no sign of making these drinks safer and people continue to buy them. 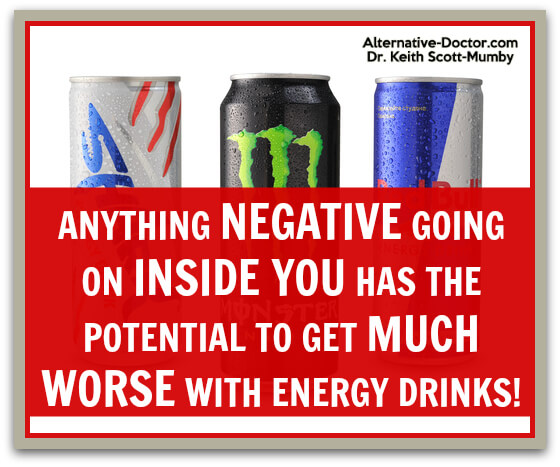 Some dangers of energy drinks include symptoms that can masquerade as something else entirely such as dehydration, nutrient deficiency, trouble sleeping, mood swings, seizures, or heart palpitations. Left untreated, some of these problems can turn deadly.

When you drink one of these things, you’re not hydrating at all. In fact, you’re allowing the ingredients in them to leech your body of water, vitamins, and minerals you need to survive.

Energy drink hazards are particularly serious for those who have existing heart problems, gastrointestinal issues, trouble with the kidney or liver, diabetes, or mood disorders such as depression, anxiety, or attention deficit hyperactivity disorder (ADHD).

Anything negative going on inside you has the potential to get much worse with energy drinks!

Avoid the risks and get your energy the old-fashioned way – through diet, exercise, quality sleep, and plenty of water. They are guaranteed to work (they have for generations) and don’t come with the potentially fatal side effects slowly coming to light with dangerous energy drinks.

If you want more pep…do it the right way. You’ll get lasting results and no chemical jitters.