Not on my watch!

As the world falls further and further from reality (REAL reality) we enter the geeky world of so-called “virtual reality”. Some people have started to believe their own digital nonsense and actually accept that the world is the way some computer spits it out.

They forget that computers only tell you what you tell them to tell you! (you might need to read that twice!) A computer or electronic device only does what the programmer tells it to do. The satanic work of Neil Ferguson at Oxford is a case in point: he’s told by Bill Gates (who pays him a LOT of money) to ramp it up and scare the world with numbers. Ferguson has been doing it for years.

But none of his predictions ever come true (including his COVID predictions) because his proprietary software (meaning he wrote it) is set up to fake the figures by exaggeration.

So, in resounding terms, I reject a nonsense “discovery” that is doing the rounds in the media, that purports to demonstrate that the maximum human lifespan is 150 and is the oldest age we’ll EVER reach.

Nonsense! First of all, I repeat that the computer can only ever spit out what’s fed in. In this case it was “health figures” from UK and US volunteers. Anyone who uses US citizens as a benchmark for health needs to have their head examined; it’s 37th in the world health table of countries, for heaven’s sake! The USA is one of the sickest countries on earth (behind Morocco, Chile and Costa Rica!) despite the astronomical spending on “health care”. Britain comes in at a miserable 18th in the table.1

So right away, the input data is biased against a true health-centered result. Did the investigators factor this in? No-o-o-o-o!

The blood test results, daily steps taken and information on the DNA of this sickly population was fed into an artificial intelligence system, “designed” to calculate maximum lifespan. And the findings predicted that the maximum a human can live naturally is from 120 to 150 years.

Did they investigate reports that some people have already exceeded that count in years? No-o-o-o-o!

Were the investigators successful doctors? N o-o-o-o-o-o! They were “experts in biology and biophysics”, to quote the propaganda. Actually they were about a half degree above geeks (one of the lowest forms of human life). They “developed an app” (you gotta laugh at the language) that could predict maximum lifespan. Oh no they didn’t. They developed an app that could spew out their own predictions on aging.

Could the app ever know more than it was told? No-o-o-o-o-o-o!

It’s worse: the investigators claimed they have developed an AI-driven iPhone app called Gerosense that, with simple input from a user, can accurately estimate the rate of biological ageing and maximum lifespan. Oh yeah? Well, how do they know it can accurately estimate the rate of aging and lifespan? Did they develop a time machine to travel forward in time and see their predictions were correct? No-o-o-o-o-o!

It’s a hoax. A farcical hoax. A scam.

The biggest hoax is typical of medical science: WHAT YOU HAVE GOT YOU ARE STUCK WITH; THERE IS NOTHING YOU CAN DO; THE CLOCK IS RUNNING AND WHEN IT STRIKES MIDNIGHT, YOU’RE DONE.

It’s so criminally wrong it takes my breath away. Yes criminal; these guys should not just be suspended and lose their credentials: they should serve jail time. What they are publishing is not science; it’s fabricated lies, disguised to look like science. They are conning us. They are conning those who funded them.

It should be said here that Bill Gates may not be behind this one! He wants everyone dead and gone by 75. To have some loose-cannon researchers tell everyone that it’s possible to live twice that long is contrary to President Gates’ diktats!

There Was Some Good

Despite the ghastly screw up, researchers got something right. They found there were two key parameters that influenced what THEY called “human lifespan”, both covering lifestyle factors and how our body responds.

The first factor is our biological age, linked to stress, lifestyle and disease, and the second is resilience, reflecting how quickly the first factor returns to normal after perturbation.

Nothing very clever about that; I and many doctors have been writing about it for decades. NOTHING exceeds lifestyle in importance in health matters. Unfortunately, they stuck with the silly and limited consideration of lifestyle, so typical of Americans: pushups, steps, crunches, calories, etc. Physical things.

They totally ignored love, harmony, beauty, emotional stability, touch and connectivity. These are way more important in aging than any physical factors, as I pointed out in my book Aging Without Growing Old (formerly Get Healthy For Your Next 100 Years).

There I told the story of emotional factors in aging, with the amazing revelation that BELONGING (connectivity, friends, community) was worth a staggering extra 30 years above average. That especially included a sense of Church, belief and serving others).

Consider a study on the benefits of belief, published in 2000 (Health Psychology).

Researcher Dr Michael McCullough and his team carried out a meta analysis of studies investigating the link between faith and longevity. What they found was that people with beliefs and part of a faith group were much less likely to die in a given time frame.

Their analysis collectively involved more than 125,000 participants, over 29 studies. The length of studies included varied from a few months to two decades.

Those who were actively involved in religious and spiritual life were 30% more likely to survive. This held true, even after correcting for other factors, such as physical and mental status, gender, race, health, behavior, and social support.2

No amount of pushups or jogging, marathons or body fat percent, can come close to that! No intervention that ignores such issues can EVER correctly guess or predict the aging process. 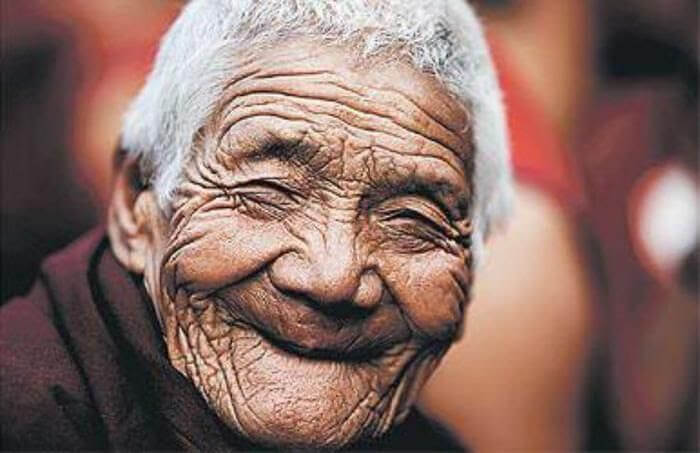 How old is this person? Does it matter—she’s smiling!

Where Are We Today? Average Life Expectancy Around The World

For most of recorded human history average life expectancy has been between 20 and 40 years. Today in the UK it is about 80 years and in the US about 78 years.

Improved nutrition, clean water, better sanitation and the application of medical science have been key elements in significantly raising our average lifespan. Today, some countries have reached an average of more than double the historical expectation.

To get an idea of just how much hogwash gets passed off as “science”, either because it sounds good, or a scientist said it, so it must be true, right? Consider this set of remarks from Gero co-founder Dr Peter Fedichev:

“Ageing in humans exhibits universal features common to complex systems operating on the brink of disintegration.

This is ignorance at its worst Fedichev. You’re missing SOMETHING IMPORTANT: life is not a physical system. There is a living vitality, a consciousness element, running the show. We are NOT a machine. We are not a digital system, either.

Here’s to the vital, conscious, living YOU!

PS If you are interested in a copy of Aging Without Growing Old, which covers all aspects of aging and what to do to beat it, follow this link.

This is a new term I’ve invented. It came to me one night – I woke up, got the phrase and then went back...
Read more
Blog

OK, I admit, I'm turning my back deliberately on medical politics this week. I'm just sick and tired of all the bad news, repeated...
Read more