This was a cold—indeed bloodcurdling—headline in a medical journal, by a lady called Christine M. Sarteschi, PhD, LCSW. She’s an associate professor of social work and criminology at Chatham University in Pittsburgh and I start with her words…

Historically, it was common for people with mental illness to be incarcerated, tortured, even killed. I wrote in my bumper book Psychiatry Without Drugs (formerly Transforming Mental Health) that the treatment of mentally ill patients has always been inhumane AND THAT IT IS NOT MUCH BETTER TODAY, IF AT ALL.

I quoted a June 1816 criticism of Thomas Monro, Principal Physician at the infamous Bedlam hospital, who resigned as a result of scandal when he was accused of ‘wanting in humanity’ towards his patients. The whole profession in my view—and I know it is shared by Peter Breggin MD—is that it is “Wanting in humanity”.

The abuse is all done by prescription today, that’s the only difference. The locks are still in place. The jailers and torturers are licensed incompetents, many of who, to their shame, are trained MDs who should be able to recognize the signs of physical—as well as purely mental—disease.

There’s one historical difference that Christine Sarteschi points out: people in the past with mental illnesses were not shot by the police like they are so often today.

Who Am I To Talk?

I’ve told this story before but it’s relevant… In my days as a junior doctor, working on “the district” (responding to emergency calls after hours over a wide geographic area), I had many encounters with psychiatric patients in crisis. Indeed it was a very common emergency.

One particular night, well after the midnight hour, I was called to a case with a man brandishing an axe and threatening mayhem. When I arrived there were policemen present. I was shown the door and told, “He’s in there, doc.”

I had imagined police support but clearly that was expectation too far! They stepped back to “allow” me to enter.

Well, I won’t serenade you with all the details. Let’s just say he eventually gave me the axe and ended up quiet as a pussycat. A double-whack of Chlorpromazine (Largactil) sent him off to the land of Nod and when he woke, his own doctor was back on the case.

My point is this: if someone had handed me a gun and said “Use it if you have to,” I would have been horrified and refused the offer, saying, “Are you the crazy one here? This guy is mentally ill, he needs medical help, not deadly force.”

The Police In The USA Today

There are few bodies of men (and women) who are so “wanting in humanity” today than the US police. I read somewhere an individual is eleven times more likely to be killed by a police officer than by a terrorist.

Here’s an image of a man in a wheelchair, shot in the face by the police “heroes” protecting our gullible public, even though he was pleading with them not to use violence! 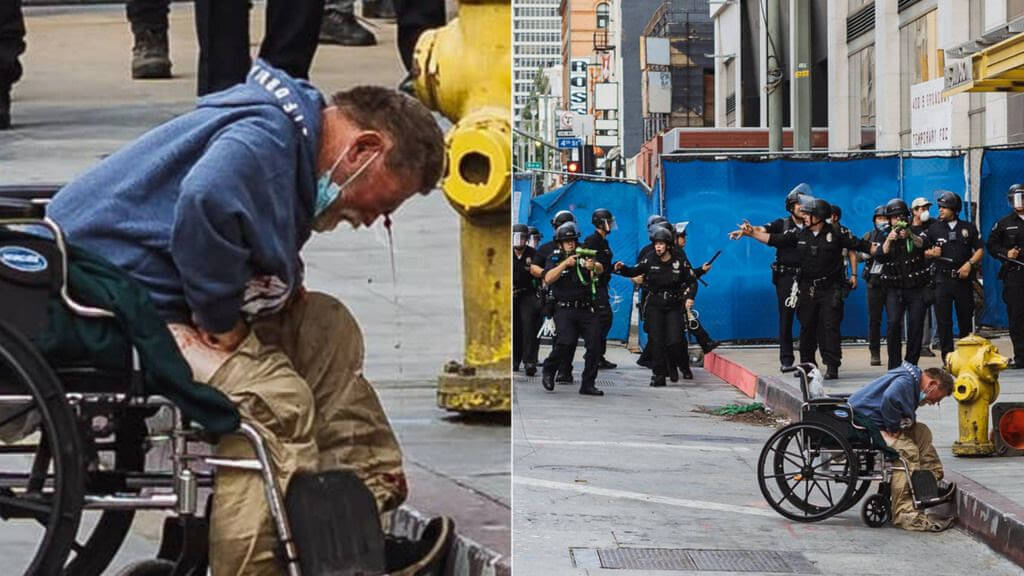 Fact is, the US police are WILDLY out of control and more dangerous than terrorists. They are cowards, pure and simple, and would rather kill a person than risk their own skin.

One case that particularly sickened me was that of a naked man running in the streets in Arizona. A policewoman (is that relevant?) simply shot him dead. I’m deeply disturbed by several points:

Thing is, a woefully dysfunctional mental care system (true of most Western countries) has led to an increasing number of police responding to psychiatric crisis calls.

People with untreated mental illnesses are 16 times more likely to be killed during a police encounter when compared to civilians who are not mentally ill who are approached or stopped by law enforcement. Approximately 25% and perhaps up to 50% of all fatal police shootings involve people with untreated severe mental illnesses. And this is despite the fact that they are less likely to have a projectile weapon or to have attacked police officers.

Despite the usual calls for police reform, data suggest that the number of people with mental illnesses being shot has not decreased. As noted by researchers, there is a paucity of information regarding the circumstances of these fatal shootings, meaning the police are very secretive and cannot easily be held to account.

One of the tragic elements of our modern-day mental health system is lack of access. We see the harmful outcomes of this in cases where a person with mental illness needs treatment but is denied access and the patient subsequently harms, kills, or is killed by police. For example, Heidi Pendleton testified that she repeatedly tried to get help for her adult son, who had a severe form of schizophrenia, before he killed Pastor Allen Henderson outside an Iowa church. He had not been taking his medication, even though it was court-ordered. She reached out to numerous mental health providers, but they would not talk to her because of HIPAA privacy laws. A first-degree conviction in Iowa means her son will serve the rest of his life in prison.

This is a hideous case of doctors who refuse to help and heal, just to cover their own ass. I’m disgusted.

In another recent case, a mother warned the police that her homeless son with schizophrenia was threatening to commit mass murder. She informed them that he had a gun and that “he has never actually never been violent. I really don’t want the police to kill him, but I don’t want him to kill anyone else either.” Soon thereafter, he was shot and killed by the police after firing two gunshots and refusing to surrender.

Anything Good Out There?

Well yes. The recently passed American Rescue Plan Act of 2021 appropriated Medicaid funding for states to provide community-based mobile crisis services to individuals experiencing mental health or substance abuse disorders. We now have the Crisis Assistance Helping Out on the Streets (CAHOOTS) model across the country.

The program utilizes medics and crisis workers instead of police for non-violent and non-crime related emergency mental health calls.

Mental health services in the U.S. are insufficient, which is why so many mentally ill people encounter the police to begin with. Without greater access to treatment resources, this problem will remain difficult to solve.

Meantime, I have written a MARVELLOUS book about the fact that most psychiatric illness is really no more than physical problems in disguise. If you felt lousy, wouldn’t you soon become depressed or anxious?

Psychiatrists are in such a rush to put people on medication, they don’t even consider the many possible physical explanations for mental symptoms: hormone imbalance, food allergy, vitamin deficiency, chemical overload, parasites, stealth pathogens… the possibilities are legion.

If ANYONE, ANYWHERE, in your family has mental health and stability problems (depression, anxiety, panic attacks, mood swings, OCD, ADD, ADHD, cognitive impairment, dementia, even schizophrenia), you need to get a copy of this masterwork.

I hope, sincerely, that no-one in your eco-system is ever challenged by police. This is a new term I’ve invented. It came to me one night – I woke up, got the phrase and then went back...
Read more
Blog

OK, I admit, I'm turning my back deliberately on medical politics this week. I'm just sick and tired of all the bad news, repeated...
Read more