Everyone is a tiny bit dishonest.  Each person has a degree of honesty that fluctuates given the situation or party involved.  We call it telling little white lies, stretching the truth, or “being kind” to another’s feelings.

If you think you’re 100% honest 100% of the time, you’re not being honest with (or about) yourself.  No one is the exception to the rule on dishonesty.

No one is objective when it comes to their own devotion to honesty.  While you might be a truly honest person in some areas (such as your profession), there’s undoubtedly another area of your life where you’re a little less truthful (relationships are a big one).

Untruth manages to creep in even when you don’t notice it.  You might be aware that you’re doing it but feel it’s a necessary action.

It begins in earliest childhood when someone asks an adult in your family, “How are you?”  You know they are doing poorly from a fight with another family member or a lost job or any number of things.  Yet, they looked that person in the face and answered, “I’m doing great!”

You’re taught to “be polite” and that doesn’t always equate to being honest as a child.  You compliment people when you don’t want to, you thank them when you don’t mean it, and you pretend to be happy in their presence when being around them is the last thing you want.

As we age, we perfect the art of our lies.  We become more convincing, we use them regularly, peppered into our conversation, and to get what we want without confrontation or stress.

However, these lies are not without price.

The Toll of Little White Lies on Relationships

When you avoid honesty in relationships (friendship, familial, or romantic), you make it impossible for the other person to respond the way you truly want them to.

For instance, if your sibling wants to get you a gift based on one they gave you years ago that you pretended to love (but actually despised), the chances are high that you’re going to get another gift you hate (accompanied by a fake smile and falsehood about how you adore it).

If you pretend to love watching sports with your significant other (but hate all sports with a passion), you can plan for a lot more sports watching in your future (and a lot more necessary lies about how much you enjoy it).

A moment of discomfort in telling the truth saves you awkwardness down the line – as well as embarrassment when you’ve forgotten all about the original little white lie you told!

This cycle of lying can create an atmosphere of distrust, confusion, and hurt feelings.

The biggest problem is that when you get caught in a lie (or several lies), it calls your entire character into question.  It’s a suspicion that if you’ll lie about little things, you probably lie about big things.

If you socialize, are related to, or surround yourself with other people who lie frequently, this method of dealing with others can begin to feel normal because “everyone else” is doing it.

Lies are necessary sometimes – a good example of this is telling someone it will be okay (after an accident) when you know things are terribly serious and not okay at all.

Lying to ease the fear or pain of another is a selfless act that requires selflessness since you may be feeling the pain and fear yourself. 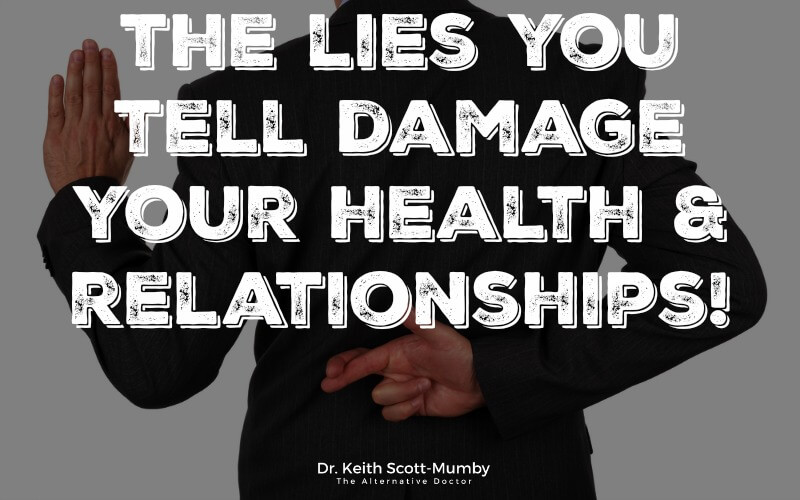 It’s terrible for your mental health, for one.  Something you may have become immune or numb to is that sick feeling inside yourself when you tell a lie.  That’s your conscience telling you, “This is wrong and you shouldn’t be doing it.”

Depending on the lie, that sick feeling can grow.  Over time, it can become a constant knot in the pit of your stomach or cause you to lose sleep or trigger depression.

These are very real mental and physical repercussions of lying.

Now, many little white lies are accompanied by the excuse that it’s to spare someone else’s feelings.  However, this is a slippery slope (and often meant to make things easier for the person telling the lie, not the person being lied to).

Political correctness can be a sticky topic but…bear with me here.  If you tell your significant other that you don’t mind their extreme weight gain, but in your mind, it bothers you almost endlessly, you’re now living a lie.

Over time, you’ll allow those feelings of unhappiness and frustration to manifest in other areas.  It may even happen subconsciously and this is your mind’s way of “correcting” the imbalance caused by the lie.  Instead of talking to them about their weight, you focus on the way they chew or that they snore sometimes or maybe how they parent or cook.

This shifts the blame to that person because you aren’t being honest in the first place.

If you were honest, perhaps you could find common ground that heals the issue and strengthens your relationship in the process.  Instead of saying, “It doesn’t bother me,” try saying, “Is something wrong?  Is there anything I can do to help?”

The Cost of Little White Lies to Your Health

Anita Kelly, a professor of psychology at Notre Dame, presented her research at the American Psychological Association’s annual meeting in Orlando, Florida.  She found that there were tangible mental and physical health benefits among those who significantly reduced the number of lies they told each day.

In Dr. Kelly’s study, half of 110 participants were told to stop telling major and minor (“white”) lies for 10 weeks, while the other half (the “control” group) was given no special instructions about lying.

The participants ranged from ages 18 to 71 and hailed from both genders, several ethnicities, and all income levels.  All came to a laboratory each week to complete health and relationship questionnaires and to take a polygraph test assessing the number of major and minor lies they had told that week.

When those in the no-lie group told three fewer white lies than in other weeks, they complained less of headaches, sore throats, tenseness, anxiety, and other problems than those in the control group.  According to Kelly, the link between lies and poor health is clear.  You could say three or fewer lies a week was as good as eating platefuls of fresh food and antioxidants!

This is because lies are internally stressful.

In addition to experiencing three or four fewer mental health and physical issues in a given week that coincided with less lying – compared to one or two fewer among control group members who also happened to lie less – participants reported that their close personal relationships had improved and their social interactions had gone more smoothly.

In other words, tell the truth and take the consequences (but be nice about it).  It’s your fault if you have done something you feel uncomfortable talking about – not the other person!

Simply tell the truth about your daily accomplishments rather than exaggerate, respond to a troubling question with another question to distract the person from your problem area, and stop making false excuses for running late or failing to finish tasks.

These are the strategies Dr. Kelly’s participants came up with to tell fewer lies during the course of the study that worked for them.  They’ll also work for you!

Ultimately, lies – even little white lies – are bad for your mental health, your physical health, and your relationships.  Starting today, take a more honest approach to your everyday life and in your interactions with the people you love.

It’s better for you…and for them.