There is a critical problem happening right now that most people aren’t aware of.  There’s an attack on antioxidants.  Before I get into the details, let me say that powerful antioxidants can mean the difference between sickness or health, between early mortality or long life, and between looking older than you are or holding back the signs of aging.

Again and again, independent labs and universities around the world prove the benefits of increasing the antioxidants in your daily eating plan (or even through supplementation if you know you don’t get enough through diet alone).

This is not up for debate.

A few years ago, there was a shocking attack on antioxidants that was launched in an article published by the Journal of the American Medical Association.  The “study” claimed beta carotene, vitamin A, and vitamin E given singly or combined with other antioxidant supplements “significantly increase mortality.”

This was a complete fabrication.

It is typical of the way in which perverted science is published without question by mainstream journals as long as it undermines natural health and living.

Even if taking these antioxidants really was associated with a higher death rate, the “researchers’ completely failed to assess or deal with the possibility that sicker people (in desperation to get well) might begin supplementation that won’t change their already terminal condition.

Refusing to address this glaring oversight creates a bias showing that “antioxidant takers died sooner” than those who didn’t take antioxidants.  That’s a far different issue than pretending that antioxidants themselves caused the problem!

These hatchet jobs are often done by a “tool” called meta-analysis.

That means you pool all the bad studies with those showing good outcomes, mix everything up, fudge all the figures and (presto!) cancel out all the good outcomes.  This particular review of 68 studies covered nearly a quarter of a million people and might sound impressive – if you don’t know how their findings are inherently flawed if not outright faked.

The whole sham study tried to imply that patients were dying of vitamins supplements, when of course they were dying of heart disease, diabetes, cancer, kidney failure, and so on.

As a doctor who takes true scientific study seriously, these “methods” are infuriating.

Let’s talk about four powerful antioxidants you need more of in your daily life.  They’re not going to “kill you off” as implied in the AMA’s poorly worked out report.

This is just a catch-all term of antioxidants from plant foodstuffs.  They’re the most abundant compounds found in the human diet.

The collective noun flavonoids, is named for their color (Latin: flavus, yellow).  Over 4,000 flavonoids have been identified, many of which occur in fruits, vegetables, and beverages (tea, coffee, beer, wine, and fruit drinks).

Flavonoids have aroused considerable interest recently because of their potential beneficial effects on human health.  Researchers have discovered that these compounds have antiviral, anti- allergic, anti-platelet, anti-inflammatory, anti-tumor, and overall antioxidant properties.

The anthocyanins are deep red to blue-black, depending on pH, and are even more powerful antioxidants.  Generally speaking, the more color, the greater the antioxidant activity plants have.

Among the most important members of the polyphenol group are the catechins and epicatechins.  They’re the principle reason that green tea has come to have such a reputation as an anti-ager.  Dark chocolate is also rich in epicatechins.

This is such a potent antioxidant that professor Normal Greenberg of Harvard has stated it should be classed as a vitamin – meaning “vital amine, essential for life and health!” 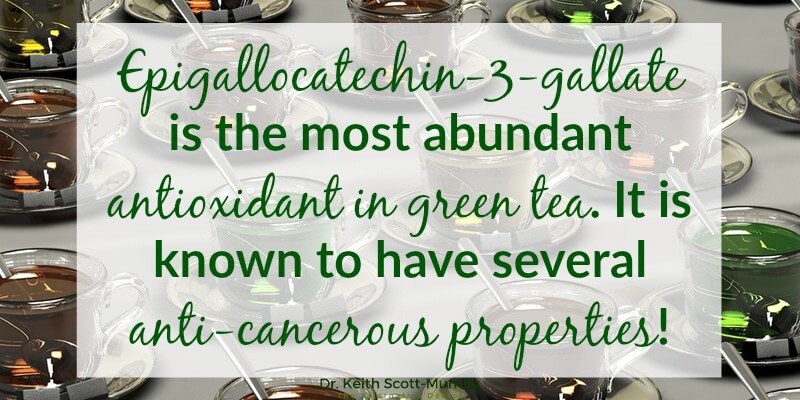 Green tea’s antioxidants, called catechins, scavenge for free radicals that can damage DNA and contribute to cancer, blood clots, and speed aging by thickening of the arteries.  Grapes and berries, red wine, and dark chocolate contain many of the same beneficial compounds.

Green tea is still your best bet because of its minimal processing.  The leaves are withered and steamed (not fermented like black and oolong teas).  Green tea’s unique catechins, especially epigallocatechin-3-gallate (EGCG), are more concentrated as a result.

Epigallocatechin-3-gallate (EGCG) is the most abundant catechin in green and white tea but does not occur in black tea, due to the fact it is fermented first.  EGCG is known to have anti-cancerous properties and can be beneficial in treating brain, prostate, cervical, and bladder cancers.

EGCG has been shown to bind and inhibit the anti-apoptotic protein Bcl-xl.  The process of apoptosis is good (programmed cell death that gets rid of damaged or mutated cells).  That means the anti-apoptosis protein is dangerous and EGCG blocks its effect.

A study conducted in Japan that involved nearly 500 Japanese women with breast cancer, found that increased green tea consumption before and after surgery was associated with lower recurrence of the cancers.

EGCG is not readily “available” to the body.  In other words, EGCG is not always fully used by your system.  Nevertheless, I can recommend it wholeheartedly because green tea does you no harm and is still extremely healthy for you.

It also seems to be good for the heart and circulation.  In a study that involved 500 Japanese men and women, researchers found that drinking at least four cups of green tea every day, may be related to the reduced severity of coronary heart disease among the male participants.

A Dutch study of more than 3,000 men and women found that the more tea consumed, the less severe the clogging of the heart’s blood vessels, especially in women.

This is a powerful antioxidant and energy booster.  It has a strong claim to be in the anti-aging toolbox.  Its full impact hasn’t been fully evaluated (but initial results are promising).

Some people react badly to it (it’s a member of the nightshade family), so ashwagandha shouldn’t be considered a panacea or “elixir of life” by any means.  Try a small amount to see if you tolerate it well before adding it fully to your daily routine.

Ashwagandha is a traditional Indian and Ayurvedic herb.  It’s believed to be strongly anti-inflammatory (this alone should help against aging).  It’s also described as an adaptogen (resists stress), an immune modulator, an anti-tumor, an anti- microbial, and may boost memory (also likely a side effect of its anti-inflammatory properties).

In a study of mice, Indian researchers found ashwagandha prevented myelosuppression in mice treated with all three immunosuppressive drugs cyclophosphamide, azathioprin, or prednisolone.

That means it was able to block the destructive effect of chemo, which causes bone marrow to stop producing red and white cells.

If you’ve ever had issues with hyperthyroid, you shouldn’t take it since it tends to stimulate the thyroid even further.  If ashwagandha doesn’t work for you, consider rhadiola (“golden root”).

Lutein is found in dark green leafy vegetables such as spinach, various fruits, and corn. Egg yolks are also good sources of lutein. Lutein provides nutritional support to your eyes and skin – the only organs of the body directly exposed to the outside environment.  Zeaxanthin belongs to the class of carotenoids known as oxycarotenoids, which contain hydroxyl groups.

Don’t Let Fake Science Scare You Away from Powerful Antioxidants!

Natural, fresh foods are best (of course).  Choose a variety of different colors and types of foods to give your body a good mix of vitamins, minerals, and antioxidants.

Ignore supposed scientific “studies” that try and tell you natural, whole foods are harmful to your health (it’s ridiculous).

Wholesome (organic when possible) foods are the key to giving your body what it needs to run all the fascinating and complex functions that happen inside you every second of every day.

There are 100,000s of studies showing that powerful antioxidants are readily available, inexpensive, and effective.  They should be added to your life and can be trusted to keep your body strong and healthy (and looking good) for many years to come.

To discover more ways to help you turn back the clock (inside and out), check out my book “How to Live Beyond 100” right now!