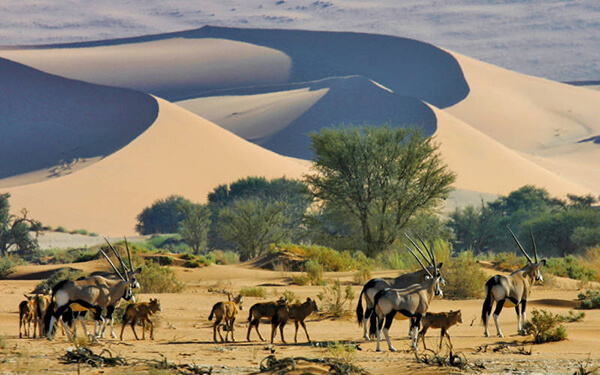 I’m in a fascinating new world, south of the equator: Namibia, in Africa. It’s Africa as you probably picture it from the movies. But Namibia is modern, advanced and thriving in its way. Most of the problems now are between the blacks themselves, not whites vs. blacks. Namibia achieved independence from South Africa in 1990.

Here are some of the most stunning and iconic landscapes in all of Africa, from the windswept desert along the south Atlantic coast, to the wildlife-rich marches of the Okavango river, from jungle safaris and game lodges with animals as part of the furniture, to tribes which still walk naked and show their all. Namibia is exciting! 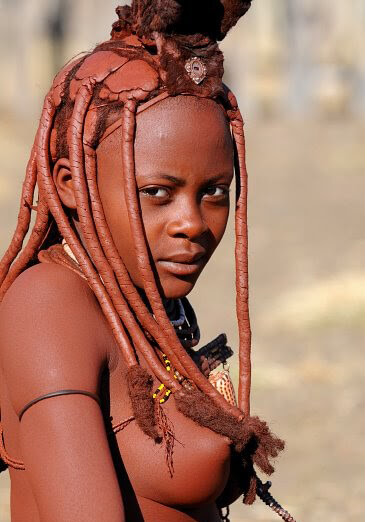 Himba women from the northwest of Namibia are naked, alluring, intelligent and incredibly healthy! They cover their skin with otjize paste, a cosmetic mixture of butterfat and ochre pigment, supposed to be cleansing where there is a lack of water.

As I type my newsletter, I’m sitting on the deck in the Ndhovu Lodge, on the banks of the mighty Okavango river. In the last 24 hours here I’ve seen elephants, giraffes, hippos, a dozen or so antelope species, storks, spoonbills, kingfishers, eagles… literally a colored kaleidoscope of exotic creatures.

But perhaps the most fascinating encounters have been with this people. This morning I met Anders Friedrichsen (not his real name, which I cannot use), seen here with Viv and me. 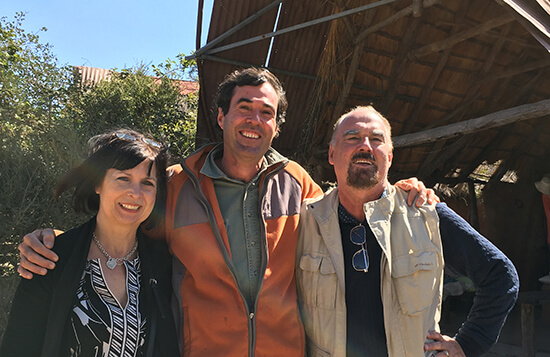 Anders would be hard to categorize, except perhaps as a passionate ethno-activist. He works with the local people, enabling them to come to terms with the new world the tribes are now encountering. As I hinted, one of the big problems today is the continuation of tribal warfare, thinly disguised as bureaucratic bullying.

A national park has been established in the region we are now visiting. Suddenly a traditional hunter-gatherer people have been told they can’t hunt! Anders is fighting to have their rights to take game restored. But, as he points out, when is a tribesman truly a hunter? When he’s wearing a loincloth? What if that same man puts on jeans and carries a cell phone by day—is he still a traditional hunter?

Most young people aspire to a cell phone at least, and some are now tempted to poach elephant: about 3 tusks will buy them the ultimate Nokia status symbol! That’s bad for the wildlife.

One of Anders’s great achievements has been the rehabilitation of game tracking. The local tribes were trackers for the “enemy” in the war with Angola and South Africa. Now these skilled men are outcasts in their own society, for betraying the left-wing SWAPO natives to the white man. Since the war ended, they have lost all purpose in life and sit around drunk and with low self-esteem.

Conversely the youngsters swagger around with Western gear, cell phone and cars. Anders arranged a fascinating kind of contest in which the older men were asked to go out in the bush and mark out signs—animal spoor, what the animal was, male or female, which direction it was travelling in, and so on. Then he drew a circle round the spoor, with its message and the younger men were asked to explain what the signs meant.

To make a long story short, the elders grew in pride and self-esteem and the young men were humbled and realized there was a great deal they did not know! As a result, young fellows have been training in Anders’s “academy” and several now have highly paid jobs, working for luxury game reserves, tracking for rich foreign expeditions. They have pride and get the best girls, the old men have renewed pride, because they trained them, and the whole tribe prospers because the local tradition says anyone who earns shares the money with anyone else!

This has reached a point where he and his star trackers have travelled the world, sharing the project and its values with Australian aboriginals, speaking to UNO conferences and other interested bodies. Suddenly hunter/tracking skills are as much in vogue as the latest Paris fashion.

Unfortunately, the local government officials have blocked this enterprise at every stage, refused funding and will not recognize these ancient skills as valuable. They even deride it.

I Learn To Be A Tracker

I got my own tracking lesson from this young lad, called Winders: 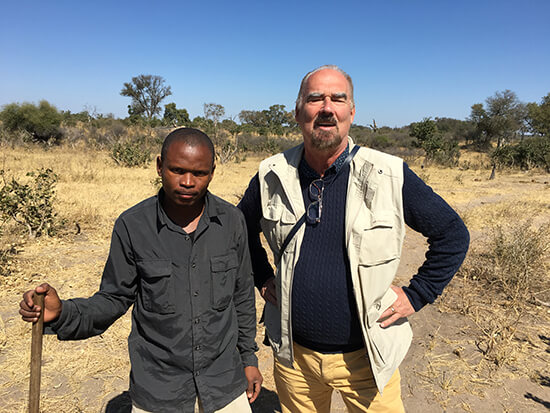 Kalahari Bushmen are short in stature

Here’s what he showed me. See if you can guess. The answer is in the caption beneath: 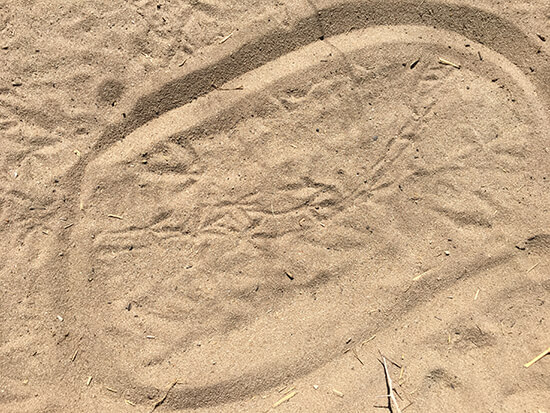 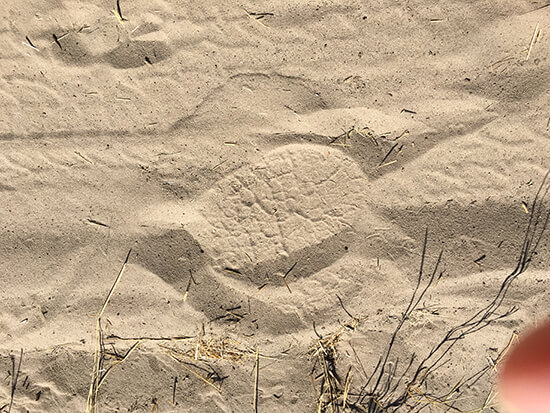 Elephant (not so difficult!) 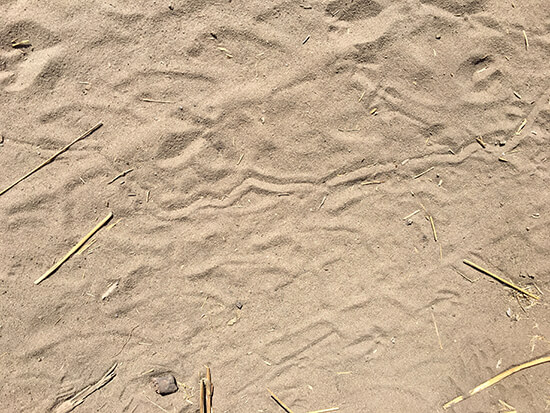 The next one was quite astonishing. Elephant passed here. Winders announced that trackers could tell which direction the elephants were travelling, that they had come from water and how far away the water was. All to do with the mud in these tiny cracks. 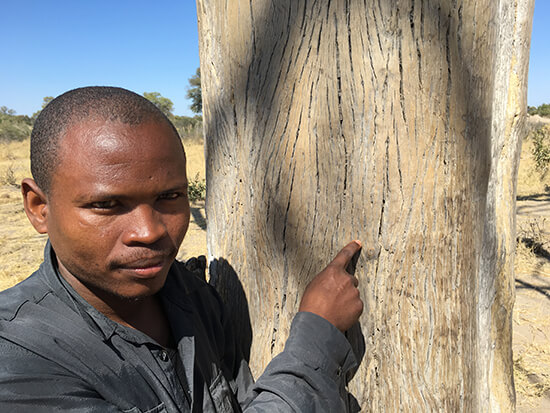 Out In The Wild

We had a fascinating lesson. It suddenly dawned on me that Vivien and I were out on the open, in the bush; there were lions, cheetah and enormous elephants wandering around in that area (not to mention mosquitos). Crocs and Hippos were nearby (hippos kill more people than the crocodiles).

Winders was completely relaxed and feared nothing. He seemed to have a calming effect on us. It was really thrilling. We were almost hunters!

The experience brought the hunter-gatherer life into sharp focus. I write about it a lot and suddenly this was paleo-living. I even picked though a pile of elephant shit and found several undigested nuts called mangeti. I washed one off, cracked it open later and it tasted fine; it had passed through the animal without any digestion (we needed a hammer to get it open). Elephants produce the most voluminous and fibrous poo (no odor); you can make paper out of it—and the Sri Lankans do. We sent several elephant-shit greetings cards to friends while we were living there.

What I Learned About Wild Life

Worried about the survival of elephants? Cheetah?

What I quickly learned is that we in the West are being subjected to propaganda B*S* (does that remind you of Big Pharma perhaps?) It’s all about money.

You’d think we were down to the last few hundred elephants in the wild! The truth? There are 50,000 wild elephants in northern Botswana alone. I learned that from Anders. A further 20,000 in Namibia and plenty elsewhere too.

Cheetah? They are a pest here. They get raised in game reserves and there are so many, you don’t need to be concerned.

Giraffes? Namibia is overrun with them! They damage trees. They are shot and left to rot, because nobody wants giraffe meat and there is no financial motive to “process” them. These are culling operations. Plenty of giraffes are left. Stop worrying! Realize that we have been subject to money-raising propaganda by fake charities and wildlife “rescue” concerns that want your dollars to pay themselves fat salaries.

The only really sad story is the black rhino. The white majority, when in control, ran a recovery program and raised approximately 300 beasts—all that were left—to a survivable 1,500 or so (these are estimates; the actual figures are supposed to be secret). Sadly, the current government are cooperating with the Chinese (the main market for rhino horn), taking obvious bribes, and allowing open slaughter at an alarming rate, which threatens to undo all the good work achieved in the past.

I won’t trouble you with images of mutilated rhino, their horns hacked off while still alive and left to die in agony. It is a piteous and worrying sight.

Suffice it to say, the whites were not all bad, the natives not all good…

Let’s finish on a cheerful and beautiful image that sums up this lovely country: 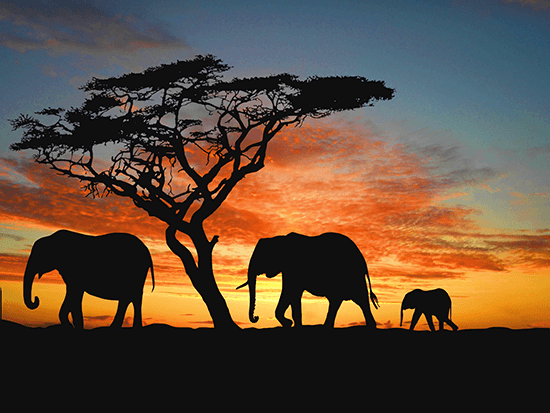