In olden times (you know, before TV) patients with leprosy were obliged to walk about ringing a bell and shouting “Unclean!” as they approached. It was, I suppose, an extreme form of social distancing. Are we going to see something similar for patients who refuse vaccination?

Luminescent badges saying DIRTY or UNVAXXED? Or an intermittent cell phone bleep that warns others to dive for cover, before the “beast” from the far side arrives nearby?

Leprosy (also known as Hansen’s disease) was a truly terrible disease and, no matter how extreme the measure, it seemed worth it, to stop the spread to others. Sufferers were horribly disfigured, it attacked bones, caused deformities and damage to the nervous system. Gradually the sufferer’s body was eaten away, or that’s how it looked.

What was so scary is that nobody understood what caused it or why individuals were infectious.

Here’s are a couple of examples of its damning effect, from modern times (yes, it’s still around). 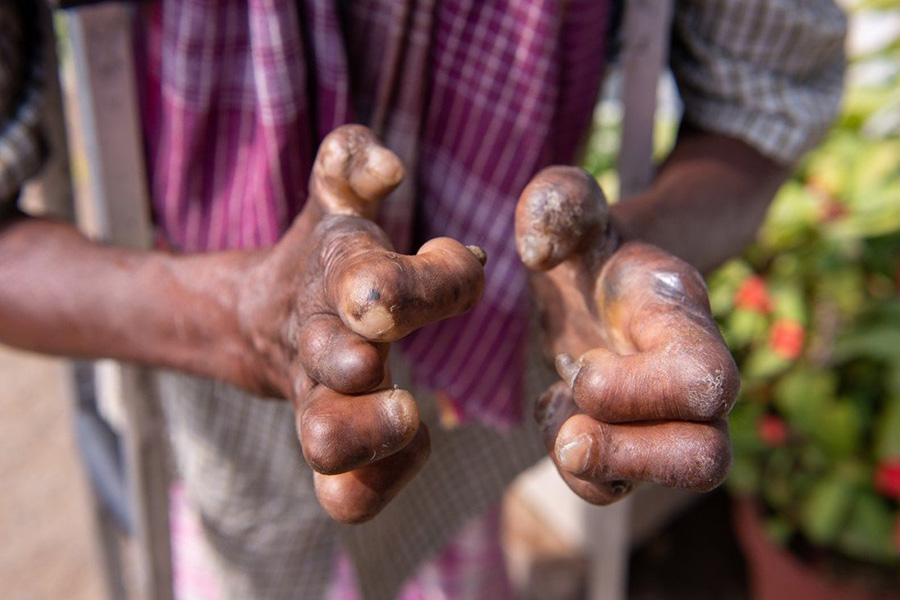 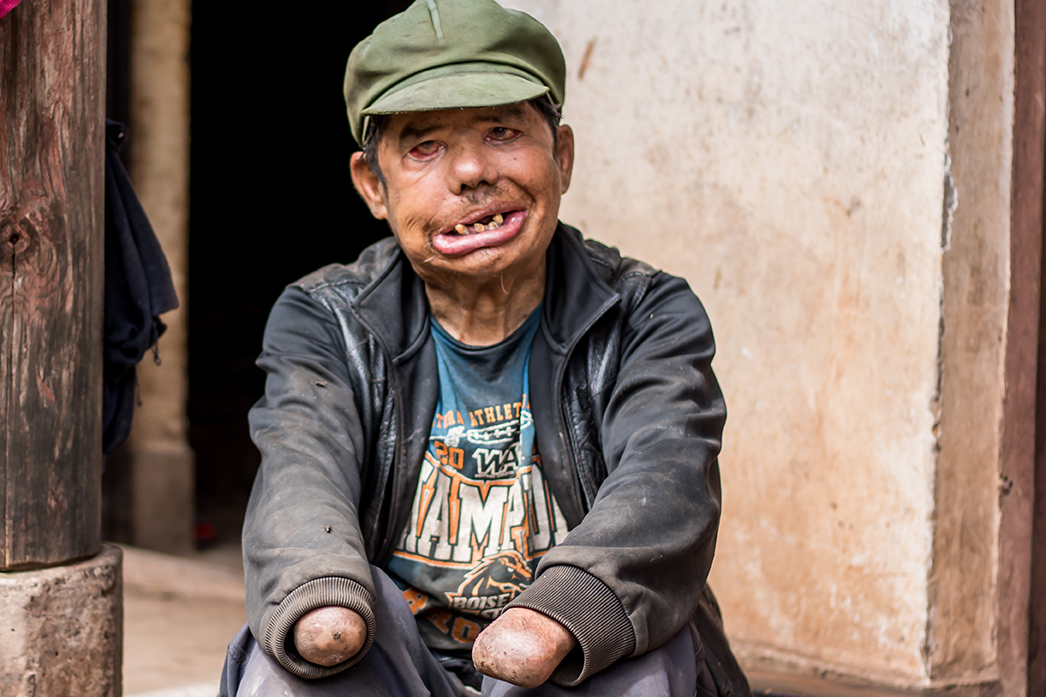 Not a disease to be taken lightly, as you see. It infects about 200,000 people every year.

The bacterium responsible for leprosy, Mycobacterium leprae, is related to the tubercle microbe (Mycobacterium tuberculosis). It evolves resistance to antibiotics by a crash-or-crash-through strategy involving large numbers of random mutations, scientists have found.

It’s a fascinating survival strategy against antibiotics. Disrupting DNA repair will result in a storm of random mutations, increasing the chance that the right gene mutates at the right spot and lead to drug resistance. But random mutations can be deadly, so it’s like a desperate, genetic Russian roulette for the bacterium.1

Crash and burn or kill!

How like the multiple “variants” of COVID that are being touted and making long-term vaccination a virtual waste of time.

Strangely, despite its long-recorded history of blighting humanity, surprisingly little is known even now about the make-up and mechanisms of M. leprae. How it interacts with its host and how it reacts to antibiotics are still medical mysteries.

Even its origins are mysterious. It was widely supposed it came from Africa, where it is rampant. But then DNA testing suggested maybe Asia. Currently, DNA tracing has led scientists to think it originated from red squirrels in Europe. The discovery supports the theory that the fluffy rodents, once prized for their meat and fur, played a role in the spread of leprosy throughout medieval Europe.2

I write this with some amusement, since we have 3 delightful red squirrels on our property in France. 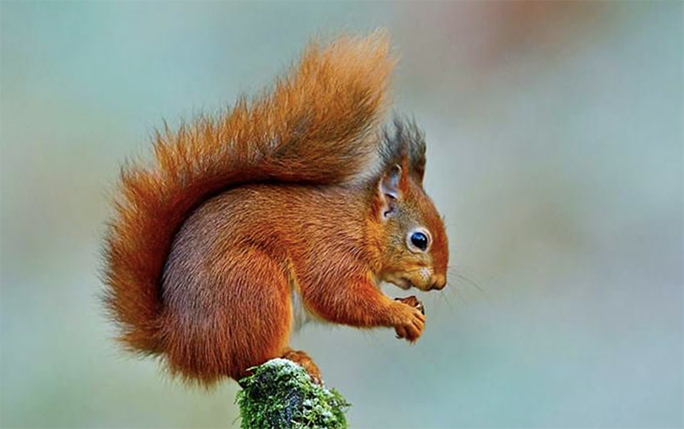 Anyway, are you getting the obvious inferences about the similarity to this COVID scare and the way we are treating each other? I feel very sorry for what our fellow humans must have gone through, while the subject of fear and scorn. Loneliness is deadly and very sad indeed.

Nothing makes us more human than BEING human, wanting to belong, sharing, company and camaraderie.

Yet mask mandating has become the new “norm”. We are no longer supposed to see each other as we really are. I find myself often asking waitresses or servers to pull down their mask, so I can see who I’m talking to. Rarely am I disappointed; I always find a warm, friendly human being hidden behind the fabric!

This is not an argument about whether social distancing has any valid science. It’s about the damage it does; the subtle cruelty; the isolation and disconnection. Is it deliberate? Maybe so.

But it is something hideous to subject children to masking, for two reasons:

But I can’t help but think also of the position of Muslim women, who are required to hide away their faces behind the burkah (sometimes burqa). It is worth noting that some Jewish sects also require face veiling. But I am surprised to read in Wikipedia that very few religious states actually mandate the burkah.3

That’s a man thing, surely. How religious loonies sold the idea that God so hated his creation that He required it to be hidden from view I cannot say!

Fortunately, many modern countries now ban the burkah, either totally or in most social situations. Then… along comes mask mandating and we are all required to turn into anonymous nobodies, men included!

We still know very little about the transmission of leprosy, except that it isn’t VERY infectious. There are two forms, wet and dry. The former is the deadliest of the two.

You may remember a scene from the film Papillon (played by Steve McQueen) in which the title character happens upon a leper colony. Papillon accepts a cigar already pre-smoked by the chief leper.

“How did you know that I have dry leprosy? That it isn’t contagious?” asks the chief.

If you take the trouble to read the original novel by Henri Charrière, upon which the film is based, there is a scene when the author arrives among the leprosy colony on the Ile Aux Pigeons, where he recounts an interaction with a man named La Puce:

La Puce handed me the bowl, saying, ‘Don’t worry. This bowl is only for visitors. No lepers drink from it.’

I took the bowl and drank, then rested it on my knee. It was then that I noticed a finger stuck to the bowl. I was just taking this in when La Puce said:

‘Damn, I’ve lost another finger. Where the devil is it?’ says La Puce.

He pulled it off, threw it in the fire and said, ‘You can go on drinking. I have dry leprosy. I’m disintegrating piece by piece, but I’m not rotting. I’m not contagious’.4

I have to say that Papillon is a good yarn but how much of it is true we may never know. There are many critics in modern times to shoot down its authenticity.

Now, your prof. likes a good story or a poetic coincidence. World Leprosy Day, 26th Jan 2020 was right at the very moment that COVID emerged (The first case in the United States was confirmed on 21st Jan 2020).

It wouldn’t do to talk scary diseases without mentioning a cure. Leprosy responds fairly well to antibiotics, though it is slow and difficult, as with all species of the Mycobacterium family.

Various countries around the world, notably India and Brazil, use the BCG bacillus to vaccinate against leprosy. The use of BCG you will be aware is typically associated with tuberculosis, but as I pointed out, these two diseases are closely related and the BCG vaccine was originally developed and widely implemented for the control of BOTH leprosy and tuberculosis.

So far, the use of vaccines has NOT led to eradication of this dread disease. Pro-vax hysterics who believe vaccines always work take note!

I hope you enjoyed this little ramble down Connections Lane!