Fascism was a very bad idea. It turned the 20th century into a holocaust.

Fascism, essentially, means telling other people what to think and do, by naked force if necessary. Medical fascism has surfaced in the constraints to compel parents to have their children vaccinated. Differing opinions are branded as madness, delusion and/or criminality. NO-ONE MAY HOLD A CONTRARY VIEW TO THE CONSENSUS. Absolutely no dissent is tolerated.

One of Hitler’s slogans was, “If you are not with us, you are against us.” That position is logical nonsense but it silenced a lot of critics.

We are starting to get the same intolerance in relation to food and diets. Vegan fascism is emerging. Apparently, if you don’t care to follow their path, you are dumb, lunatic or cruel. Not only must you eat the way they do, but you must do so for the RIGHT reasons!

Sounds silly? I have very good friends who are vegans, but not from issues of animal cruelty, just health reasons. They feel much better eating vegan. Recently this couple went on a vegan cruise and were astonished to find themselves ostracized, because they explained to fellow cruisers they were vegans because they were “plantarians” (plant eaters by choice), not because they were animal lovers or activists.

That wasn’t enough for the thought police mob. Being vegan wasn’t enough. It was implied they must be cruel, evil people if they were not doing it because they were concerned about animal welfare!

Vivien pointed out for me that there are now bands of vegans roaming the streets, carrying placards and bursting in on diners in restaurants, screaming abuse, chanting slogans about animal cruelty and showing horrific pictures purportedly of farming practices they object to.1

It’s all dogma, of course, just like Nazism was all dogma. Dangerous dogma. I’m worried that we are not too far from the era when animal “activists” will actually hurt or kill humans who don’t share their concerns.

I don’t know how many of you saw the recent brouhaha about another stream of food fascism. Someone has proposed that we must all eat responsibly, to “save the planet”. I’ve heard of lots of daft reasons to justify different diets: but politics instead of health?

The UK Guardian picked up on this story and I got it via MedScape, the doctors’ online newspaper. We must all, we are told, cut our intake of red meat and sugar consumption by half, while vegetables, fruit, pulses and nuts must double. North Americans need to eat 84% less red meat but six times more beans and lentils. For Europeans, eating 77% less red meat and 15 times more nuts and seeds meets the guidelines.2

Here it is as a graphic: 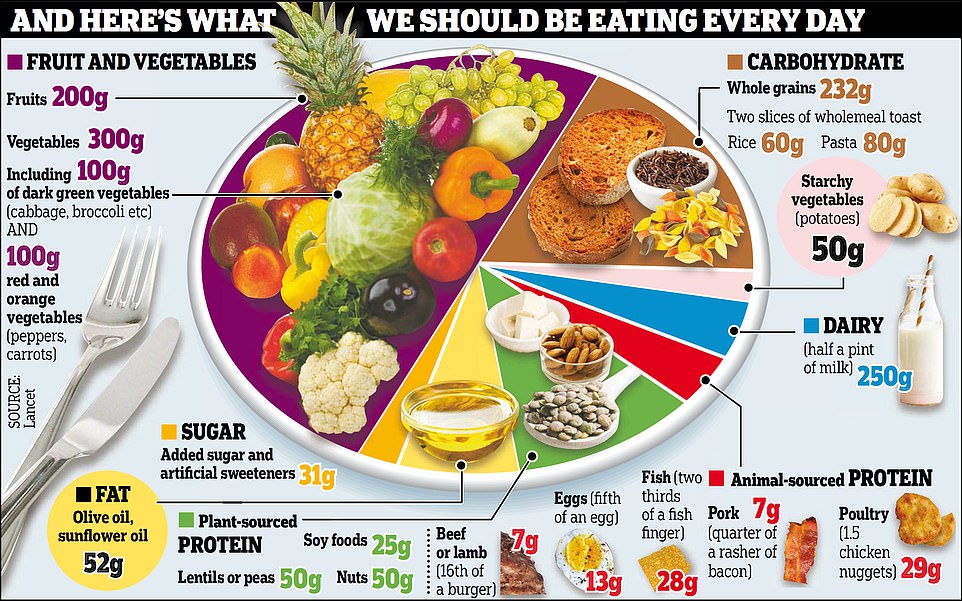 It translates to eating just 7g of pork a day, 7g of beef or lamb and 28g of fish – the equivalent of a quarter of a rasher of bacon, a 16th of a burger and two-thirds of a fish finger.

There is no concept of food allergies or intolerance in this “scientifically studied” diet, even though we already know that grains are very bad for the brain and carbs are very bad for metabolic health and diabetes! Beans and lentils too can be pretty toxic, unless cooked really well, which ruins their nutritional worth. It even recommends 31 grams daily of sugar, which is nothing short of criminal. Of course you can’t expect much integrity from a bunch of frauds who got paid serious money to “find” and recommend what the person who funded the study wanted to be “found”.

But the diet is a “win-win”, according to the scientists paid to come up with this plan. It would save at least 11 million people a year from deaths caused by unhealthy food, while preventing the collapse of the natural world that humanity depends upon. Just plain opinions, plucked from the air by “scientists” does not make it science.

As usual The Guardian newspaper (only one step up from communist “Daily Worker”) got it all wrong. This EAT-Lancet diet they said was created by an “international commission”, making it sound very official. You’ll laugh (or spit) when I tell you WHO actually commissioned it…

This hypocrite wants to tell people what they must eat, to avert planetary disaster, yet she jets around the world in her $25 million Bombardier Challenger 350 private plane, releasing pollution and a massive carbon footprint wherever she goes. 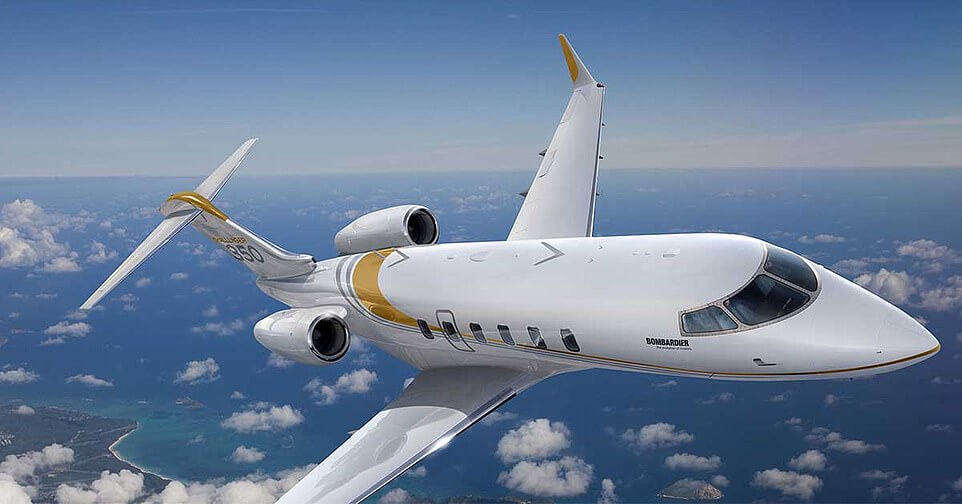 Stordalen has rightly been accused of hypocrisy after flaunting her wealth on her Instagram channel, showing herself and her husband Petter jetting off to Cuba, Spain, Antibes and Mexico. Aircraft fuel consumption and emissions are far more damaging to the environment than the farting of livestock, which is what the scientists were most concerned about, apparently.

Mike Carrato (@MikeCarrato) did the Googling for me and found that a cross country round trip private flight releases about 42 tons of carbon. Another Google estimate was that each cow emits about 6 tons a year. So Stordalen consumes about 7 cows PER TRIP! That’s also her projected beef quota for 20 people for A WHOLE YEAR, every trip.

Christopher Snowdon, head of lifestyle economics at the Institute of Economic Affairs in London, told the UK Daily Mirror: ‘The hypocrisy of this is breathtaking. This is a campaign telling ordinary people they should be eating less than half a rasher of bacon per day for the sake of the environment, while the patron is flying people around the world in private jets creating one enormous carbon footprint.

This is a classic case of do as I say not as I do. Militant environmentalists can’t resist the chance to tell people how to live their lives and demonise everyday items of food.3

There is something fundamentally bad about nutritional science. It is heavily perverted and corrupted by those on an agenda, causing a great deal of confusion over WHAT to eat. Take the 2013 PREDIMED study (Primary Prevention of Cardiovascular Diseases with a Mediterranean Diet), billed as one of the most important recent diet studies published.4

It found what we all know: the Mediterranean Diet is good. Eating like the Spanish, Italians, and Greeks do—dousing food in olive oil and loading up on fish, nuts, and fresh produce—cuts cardiovascular disease risk by a third. As Stanford University health researcher (and a famous critic of lousy nutrition science) John Ioannidis put it, as a study: “It was the best. The best of the best.”

Not anymore. In June 2018, the prestigious New England Journal of Medicine issued a rare retraction. Apparently the process of randomization was not done correctly. Far from being scientifically excellent, PREDIMED now appears to be quite flawed.

NEJM republished a new version of PREDIMED, based on a reanalysis of the data that accounted for the missteps. It did not change the finding that the Mediterranean Diet was remarkably healthful. But it was a warning to those who want to trust institutional science. Beware!

To date, PREDIMED remains the largest dietary intervention trial to assess the effects of the Mediterranean diet on cardiovascular disease prevention. It is far more telling and prescriptive than the deceptive one from Ms. Stordalen (sorry, Dr. Stordalen).

Basically, Stordalen has commissioned and launched a scam. Walter Willett is the principal nutritionist on the EAT-Lancet report. The other nutritionists on the paper have published almost nothing on the subject of diet and disease, and nothing that contradicts Willett’s views. Thus, on the subject of diet and health, the report presents only one viewpoint. This report cannot be considered a balanced paper.

Nor can Willett be taken seriously as an objective, unbiased scientist. Look at these conflicts of interest, found by Nina Techolz @BigFatSurprise and reported on her Twitter Channel.5

In fact we cannot take any of these so-called “experts” seriously because, according to The Sun reporter Nick McDermott, none of them ate the recommended diet!

Let me finish by saying I have no issue with someone being a vegan. But I DESPISE self-righteous fools trying to take over other people’s thoughts and lives. It’s fascism, by any other name.