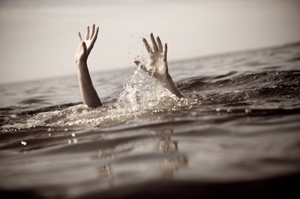 I didn’t choose this topic because it’s pleasant but because it’s informative (you know me!) I give this knowledge most years, in the hope it will one day save a life.

Accidental death is a relatively rare form of demise, though proportionately higher in younger people, since they don’t get the disease spectrum of older folks. Drowning is one of the commoner accidental deaths, after road traffic accidents, of course.

Did you know that in cold Northern waters (these figures are from the UK and would apply to the north Atlantic and north Pacific, but not necessarily the Caribbean) 55% of drownings occur within 10 feet of safety? That’s surprising.

Also 66% of victims are good swimmers. How can that be?

It tells us that people in the water can get into difficulty within seconds and rapidly become helpless. Typically, when a victim realizes that they cannot keep their head above water, they tend to panic. This leads to the classic “surface struggle”, where they flounder and thrash in the upright posture, out of control.

It is important to realize that a drowning person has no voluntary control over their actions. They experience what is called an Instinctive Drowning Response. When this is established (and it comes on very quickly indeed) the drowning person cannot stop drowning or perform voluntary movements to help them survive, such as swimming, waving for help, moving toward a rescuer, or reaching out for a piece of rescue equipment.

Studies with New York lifeguards in the 1950s and 1960s found that this surface stage lasts only 20- 60 seconds.

Drowning is almost always a deceptively quiet event. Struggling to breathe, they cannot stop gasping to shout for help. The waving, splashing, and yelling that people suppose is what a drowning looks like (because of stupid films and television), is rarely seen in real life.

To get an idea of just how quiet and undramatic surface drowning can be, consider this:  It is the number two cause of accidental death in children, age 15 and under (just behind vehicle accidents) – of the approximately 750 children who drown each year, about 375 of them will do so within 25 yards of a parent or other adult, who is unaware of anything abnormal ocurring.  In ten percent of these drownings, the adult will actually watch the child drown, having no idea it is happening (source: CDC).

Sometimes the most common indication that someone is drowning is that they don’t look like they’re drowning.  They may just look like they are treading water and looking up at you.  One  way to be sure?  Ask them: “Are you alright?” If they can answer at all – they probably are.  If they return  a blank stare – you may have less than 30 seconds to get to them before they go under.

Let me re-emphasize that a drowning person is GONE from the surface in from 20- 60 seconds. Throwing them a life ring will not work, because of the Instinctive Response. You have to get to them and pretty quick. That’s why Life Guards are so wonderful.

When the victim finally goes down and can’t re-surface, they hold their breath as long as possible; typically only 60- 90 seconds and then are forced to inhale, which brings in water and blocks the gas exchange in the lungs. Inhaling water also triggers a spasm of the larynx, to seal the airway shut against water. The end then comes quickly.

Once the oxygen supply is cut off, a calmness soon ensures, from loss of consciousness. That’s when people see the “tunnel of light”, angels etc. We have learned this from those plucked from death at the very last moment of life.

What lies beyond the popcorn cell phone hoax?

Magnesium Cuts Risk of Cerebral Palsy in Half

Cocaine Use Ages You Faster