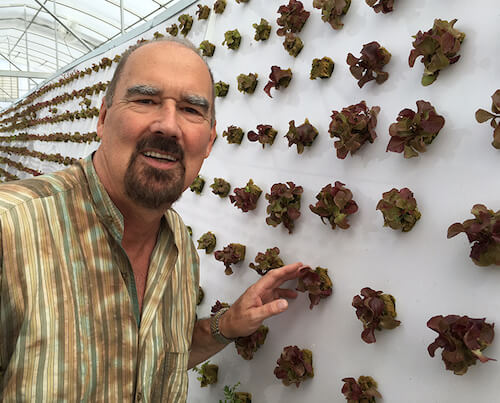 Gardening, especially public, renegade gardening, is one of the most important things conscious and awakening people can do right now to affect global change in favor of good health, a sound environment, and personal liberty—Alex Pietrowski, Staff Writer, Waking Times

The following three paragraphs are directly from RealFarmacy.com. As someone who loves gardening resources, the message resonates well with me!

The most effective change-makers in our society aren’t waiting around for a new president to make their lives better, they’re planting seeds, quite literally, and through the revolutionary act of gardening, they’re rebuilding their communities while growing their own independence.

Every four years when the big election comes around, millions of people put their passion for creating a better world into an increasingly corrupt and absurd political contest. What if that energy was instead invested in something worthwhile, something that directly and immediately improved life, community, and the world at large?

The simple act of growing our own food directly challenges the control matrix in many authentic ways, which is why some of the most forward-thinking and strongest-willed people are picking up shovels and defiantly starting gardens. It has become much more of a meaningful political statement than supporting political parties and candidates.

Take, for example, Richard Reynolds, the UK’s ‘Guerilla Gardener’ who since 2004 has transformed derelict sites and buildings around south London, through stealthy overnight planting.

He has since become a media sensation all over the world and now does plantings in broad daylight! Reynolds has been blocked and even attacked by mindless city hall bureaucrats (read: thugs), who just take a delight in trashing every community initiative and seem hell-bent on creating a dismal lifeless environment for citizens to live in. Check out Reynolds achievements at: http://www.guerrillagardening.org 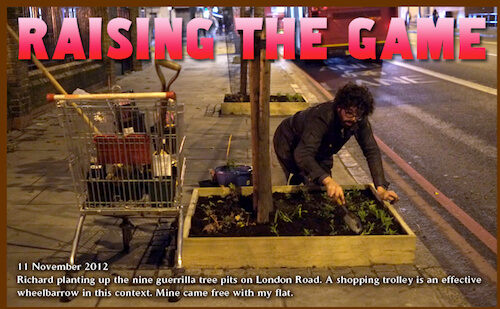 How about vegetables, also to strengthen the heart? Ron Finley, a renegade gardener from Los Angeles, has taken that direction. He is a revolutionary who is waging guerilla war on the corporate food system, which, he says enslaves Mankind:

I live in a food prison. It’s all by design just like prisons are designed. I just got tired of being an inmate. So I figured, let me change this paradigm, let me grown my own food. This is one thing I can do to escape this predestined life that I have unwillingly subscribed to.

The environment he is planting could hardly be more hostile. It is basically desert in South Central Los Angeles, the area that made drive-by shootings famous. Finley started out by planting in the little patch of abandoned ground and weeds between the road and the sidewalk. It just grew from there (excuse the pun!)

Again, the city hall bureaucrats attempted to regulate him by issuing a citation, then placing a warrant out for his arrest, but a swift public backlash against the totalitarian idiocy of the charges against him helped him gain notoriety from the community, and support from city officials.

This represents another win for the food freedom movement, much like what recently happened in Florida when city policy was overturned and a young couple was able to continue gardening in their own front yard.

“Growing your own food is like printing money,” says Finley, who also shares the simple wisdom of how to get kids to eat kale and tomatoes. “If kids grow kale, they eat kale. If they grow tomatoes, they eat tomatoes. But when none of this is presented to them, if they’re not shown how food affects the mind and the body, they blindly eat whatever the hell is in front of then.” 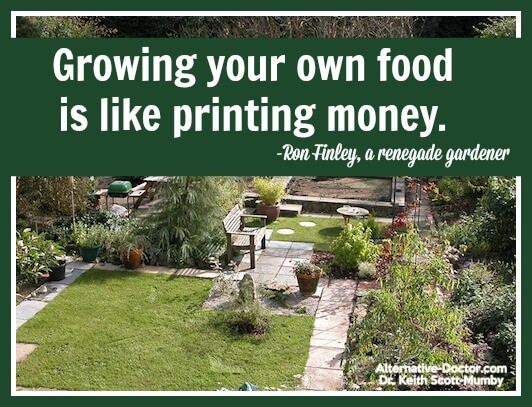 You can’t be free in a system that has total control over your food. So, for today’s citizen, growing at least some of your own food is an act of political rebellion. Mind you, it can get you in big trouble.

In 2011, Julie Bass of Oak Park, Michigan was charged with a misdemeanor and threatened with jail time for planting a vegetable garden in her front garden.

In British Columbia, Dirk Becker was threatened with six months in jail for converting an acre of his 2.5-acre lot into an organic farm. The owner spent over a decade healing the land and converting a barren plot into a self-contained ecosystem that is now home to thriving vegetable crops, fruit trees, bees, butterflies, birds, frogs, dragonflies and more.

In 2013, city inspectors bulldozed more than 100 types of plants, including garlic chives, strawberry and apple mint, being grown by Denise Morrison in Tulsa, Oklahoma. The inspectors said her plants were too tall, but city code allows for plants over 12 inches if they’re meant for human consumption, which hers were.

Steve Miller was fined $5,200 for growing vegetables in his Clarkston, Georgia backyard, which he not only consumed but also sold at farmers markets and shared with friends.

One could easily suppose that the food industry is bribing officials to get this grass roots movement stopped (much like Big Pharma wants grass roots healing criminalized).

Anna Hunt from Waking Times has some helpful hints:

It is easy to think that growing your own food is difficult, but the hardest part is the first plant. Once you realize what a joy it is to re-connect with your food, and just how easy and fun gardening is, you’ll thank yourself…

There are numerous resources that offer information about home food cultivation; some are provided below. Perhaps you’ll be faced with some interesting battles with your local government authorities, but you might also start a trend that transforms your hometown into an edible town. And you’ll also be doing your duty to ensure that future generations are able to exercise the basic right to grow nutritious food.

The Backyard Homestead: Produce all the food you need on just a quarter acre!

Getting Started In Permaculture: 50 Practical Projects to Build and Design Productive Gardens

And, as it happens, this piece was inspired by a visit to a hydroponics facility here in Las Vegas. Gardening is on my mind right now. Growing your own food, as Finley says (jokingly) is “gangster” or “gangsta”, a neologism (new word) meaning cool!

Viv and I recently bought ourselves a hydroponic tower (don’t, by the way—you can get them on eBay but NOT recommended). Frustrated by the difficulties of this murderously dry climate (1 – 2 % humidity some days; we have to spray the inside of our noses), I felt we needed to see what was working here is the desert.

The result was a very pleasant afternoon at a 5,000 sq. ft. indoor vertical hydroponic facility with master grower Tom Skancke in south Las Vegas. We saw vegetables being raised on vertical sheets, from seeds to full-size edible plants in 4 weeks. That’s awesome! Turns out we had been eating some of his produce at one of our favorite restaurants.

Here are some pictures… which just about tells the whole story. 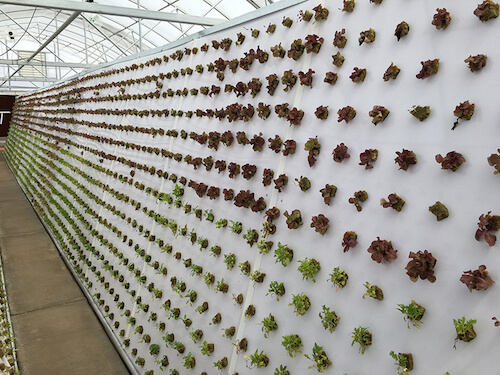 Enough to supply 100 homes on one wall!

Lettuce. Lots of it! 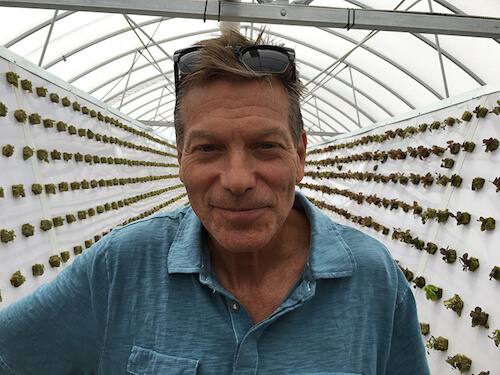 Growing-your-own is definitely radical stuff. You need to love it, to feel it’s worth the effort. But if you like fresh food, there is nothing better than growing your own. PLUS we can solve the planet’s food needs through “Aquaponic”, “Hydroponic”, “Aeroponic” and “Algae” farming.

Who cares about presidents slugging it out over status?

P.S. couldn’t miss boasting my own green-fingered efforts. I turned a grass field into this in 5 years. 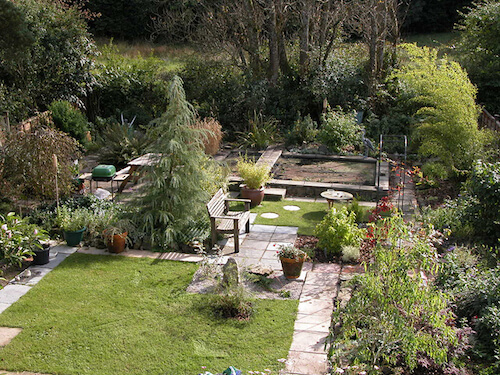 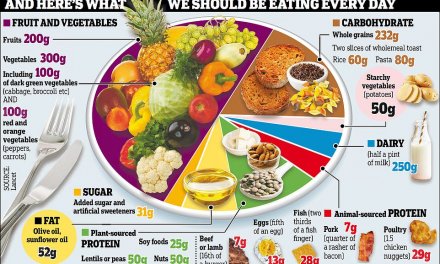 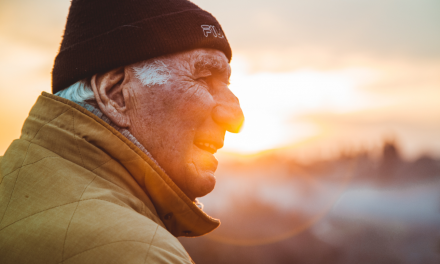 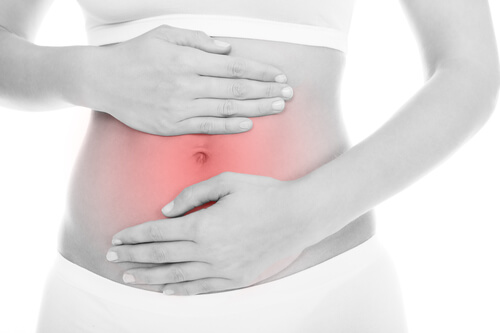 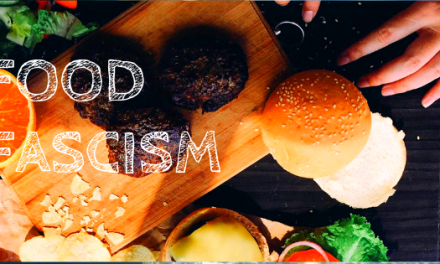