Don’t Fight the Signs of Aging with Dangerous Techniques!

Some people will do anything to stay forever “young” – even if it presents a measurable risk.  There are natural ways to fight the signs of aging that don’t put your body in danger!

One of the biggest fads in the past two decades is cosmetic fillers.  A “substance” (they vary wildly) is injected into the skin to reduce the appearance of wrinkles to fill out specific areas of the face or to make lips look fuller and younger.

These injections – and other more invasive procedures – can affect the entire human body.  Many of them (even the ones that seem harmless) can have severe long-term risks that are seen as the “price” of beauty.

The American Society of Plastic Surgeons (ASPS) released their statistics in 2016 and it is mind-blowing how drastic things have gotten since the year 2000.

They showed an increase in overall procedures by 115%!  Cosmetic fillers represent about 9 million of the minimally-invasive procedures (these include include soft tissue fillers, chemical peels, laser hair removal, and microdermabrasion).  Botox alone has shown a 759% rise in use!

Research shows that it could have an impact on your mental (as well as your physical) health.  Constantly “sculpting” yourself can become an addiction called body dysmorphic disorder.  This is when a person is never satisfied with the way they look or try to radically fight the signs of aging at any cost.  They try to achieve “perfection” that always feels just out of reach.

The cost of cosmetic alterations is substantial.  Psychology Today wrote a piece on the ASPS report and wondered what that $16 billion that Americans spent in 2016 is trying to “fix.”

Are we so afraid of looking older or unattractive that we’ll do anything, spend anything, to reverse every perceived “defect” that appears?

The Health Repercussions of Cosmetic Fillers

While cosmetic fillers are considered “safe” for the most part, it should come as no surprise that many people have stark reactions to them.  The ASPS listed these potential side effects on their website and stated, “Severe complications from dermal fillers are uncommon.  Potential risks vary depending on the specific filler used and the relative permanence of the filler substance.”

Reported Side Effects of Cosmetic Fillers 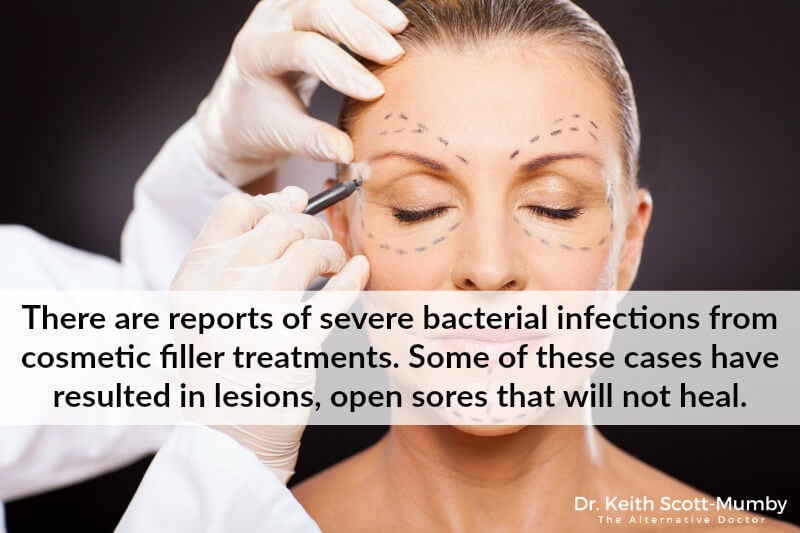 While plastic surgery (invasive or non-invasive) is an individual choice, there seems to be an almost panicked desire to fight the signs of aging by any means necessary.  Surely allergic reactions, facial disfiguration, and nerve damage are worse than wrinkles!

Now there are now reports of severe bacterial infections from cosmetic filler treatments.  This should come as no surprise.  Some consumers who have had various treatments have developed lumps under their skin that are tender and don’t respond well to treatment.  Some of these cases have resulted in lesions, open sores that will not heal.

This is a side effect caused by bacterial infection – in your face.

Your skin is fragile.  It’s made up of elastin, hyaluronic acid, and collagen, which combine to give your skin cells a supple, firm, and youthful appearance.

As you age, your body produces fewer of these substances which results in a weaker support system underneath your skin that leads to sagging, a decrease in production of new skin cells that make the skin feel rougher in texture, and wrinkles result from damage (sun exposure, acne, and dehydration) to the outer layer of skin.

Manufacturers found ways to find ways “plump up” the network under your skin.  It’s basically an artificial foundation under your skin to mimic the support system you have in your youth.

It’s an illusion of healthy “young” skin that isn’t reality beneath the surface.  The treatments are not permanent.  Once you get cosmetic fillers, you must keep getting them several times a year to maintain this facade.

The compounds injected range from collagen found in cow skin, lab-created collagen grown from human cells, a synthetic version of the hyaluronic acid you produce naturally, moving the fat from one part of your body (such as your thighs) to another (your face), and many more.

The practice of cosmetic fillers was once used sparingly – and ethically – to rebuild tissue disfigured from accidents, birth defects, and other trauma.  The risk in cases like that were understandable, perhaps even preferable.

Companies that make a lot of money from these treatments for no other reason than to offer consumers the chance to fight the signs of aging say the allergic reactions and other side effects are rare.  They point to individual cases and suggest that it is the patient’s body – an unknown allergy or compromised immune system – that is at fault.

Never the unnatural injection of toxins into the face…that couldn’t be it!

A study published in the Pathogens and Disease journal disagrees.  University of Copenhagen researcher Morten Alhede stated, “Research has now shown that the disfiguring lesions are actually due to bacteria injected in connection with the cosmetic procedure.  What is more, we have demonstrated that the fillers themselves act as incubators for infection, and all it takes is as few as ten bacteria to create an ugly lesion and a tough film of bacterial material – known as biofilm – which is impossible to treat with antibiotics.”

Not only is there an infection in your face from this stuff, the bacteria themselves are proving to be antibiotic resistant!  The companies refuse to admit that the lesions are bacteria related…so they treat the patient with steroids.

Thomas Bjarnsholt, an associate at the University of Copenhagen, explained, “This is actually the worst possible treatment because steroid injections exacerbate the condition and give the bacteria free rein.”

They cause the bacteria that can’t be killed by antibiotics and then throw fuel on the fire!

Quiet About The Risks…

Since the cosmetic surgery industry is hush-hush about the problems surrounding their treatments, experts estimate that between 1-in-100 and 1-in-1000 people end up with a bacterial infection as a result of having cosmetic fillers.  That may not seem like much until you remember that approximately 9 million people a year get these treatments.

As Professor Bjarnsholt so eloquently put it, “Most people are unlikely to have any problems undergoing a filler treatment…however, it’s a bit like driving a car: there’s nothing wrong with not wearing your seatbelt as long as you don’t hit anything.”

Feeding your cells from the inside out, living a healthy lifestyle, and choosing to “baby” your outer self with organic, natural products is far better than injecting some “youth serum” cosmetic filler into your face to fight the signs of aging!