Centuries ago, men made maps and at the edge were often found the words “Here be dragons”. There were no dragons, of course. It meant we didn’t know what was out there. But it also meant that humans were afraid of things they didn’t know. “Better not to know”.

And so, the Medieval mentality was about ignorance and fear. It was kept in place by the powers that wanted people kept in fear and easily controlled. Outstandingly, the Church built its power on ignorance and fear: fear of Hell, fear of devils, succubi, witches, incubi, fear of KNOWLEDGE! It could get you tortured and killed, to be curious about what the world was really like.

Galileo, one of the greatest scientists of all time, narrowly escaped being executed for daring to say the Earth was not the center of the universe and that Jupiter was a mere planet, with moons of its own. As it was, he spent the remainder of his life under house arrest.

What about his evidence of the facts? The authorities wouldn’t even look at it! They famously refused to look through his telescope and see for themselves that what he saw was real. THAT’S A WAR ON KNOWLEDGE.

One of my all-time heroes is Giordano Bruno (1548 – 1600), an Italian Dominican friar, philosopher, mathematician, poet, scientist and cosmological theorist. He proposed that the stars were distant suns surrounded by their own planets, and he raised the possibility that these planets might foster life of their own. He also insisted that the universe is infinite and could have no “center”.

But starting in 1593, Bruno was tried for heresy by the Inquisition on charges of denial of Catholic doctrines, including he didn’t buy the idea of eternal damnation, the Trinity, the divinity of Christ, the virginity of Mary, and transubstantiation (that the body and blood of Christ is truly in the bread and wine, not just metaphorically).

He believed in pantheism (God everywhere, not just an entity or being). He also taught reincarnation, which strangely was an early Christian doctrine, later hidden and removed.

The Inquisition found him guilty, and he was burned at the stake in Rome’s Campo de’ Fiori in 1600. There is a statue there, commemorating his martyrdom for science. I took this horrifying picture of a drunken scum, puking at the base. I considered it an atrocious insult to a man who died for us and for the freedom of thought. 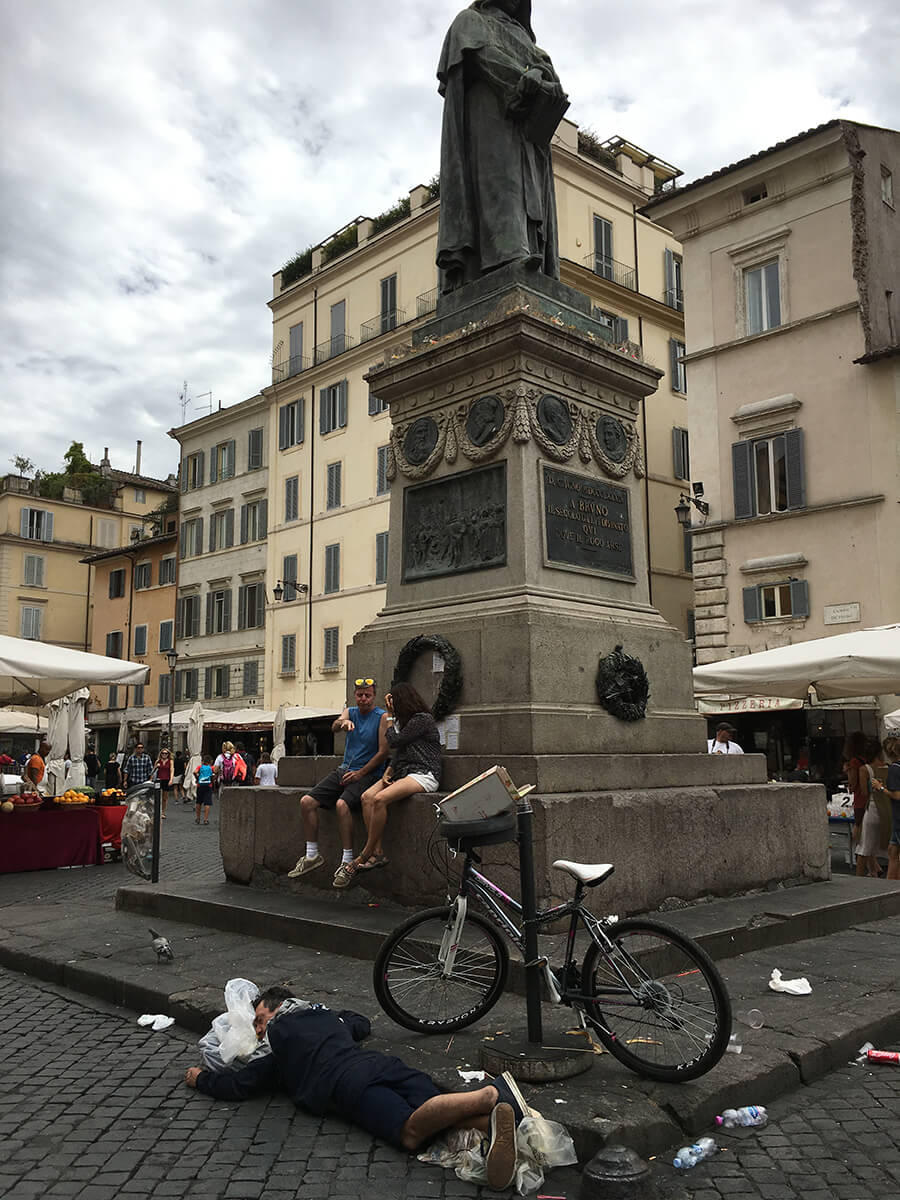 After his death, Bruno gained considerable fame, being particularly celebrated by 19th- and early 20th-century commentators who regarded him as a martyr for science. Bruno’s case is still considered a landmark in the history of free thought and the emerging sciences, although I find that odd, since he was executed cruelly for daring to think freely. It can get you in BIG trouble.

And so it is today. You could lose your job and be out on the streets (literally) for daring to think differently from the mainstream. We have gone back 8 centuries to Medieval repression and ignorance.

Science is scorned. This is a WAR on knowledge.

My first wife was née Bacon. She was of the tribe of Roger Bacon and Francis Bacon, two great British philosophers!

We can dismiss Roger Bacon (1220 – 1292) with a nod. He too was a friar and his nickname was “Doctor Mirabilis” (the miracle doctor). Bacon emphasized the importance of empirical research—actually LOOKING at nature, to learn by observation (no Google or Facebook in those days, to TELL him what was true and what wasn’t!)

Francis Bacon (1561 – 1626) is more of our era. He famously said, “Knowledge is power”. These days he is quoted as an authority on learning but it is just possible that he actually meant: if you could get the dirt on someone, you could blackmail or control them! Getting ahead in the court of Queen Elizabeth I was a dangerous and convoluted game!

Bacon was the 1st Viscount St Alban, also known as Lord Verulam, and served as Attorney General and as Lord Chancellor of England. Part of his education was just down the road from me here, at Poitiers University. His works are seen as developing the scientific method and remained influential through the scientific revolution. 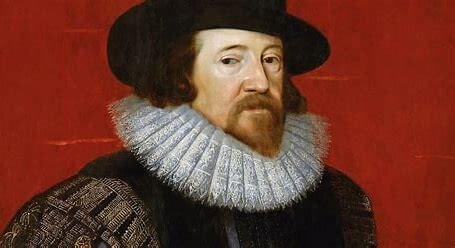 He argued for the possibility of scientific knowledge based only upon inductive reasoning and careful observation of events in nature. Most importantly, he argued science could be achieved by the use of a sceptical and methodical approach whereby scientists aim to avoid misleading themselves. His specific proposals about such an approach, the “Baconian method”, led to him being dubbed the father of the scientific method. [Wiki]

Well, I suppose you didn’t expect a history lesson from the good doctor! But actually I prefer to think of this as perspective, not history. We are going through weird times, when Draconian authority is taking over from logic, reason and science. It’s just like the old days… but worse, because we should have learned better by now.

The ones gnashing their teeth and wailing loudest about “anti-science” seem to me to be the most destructive anti-science influence we have seen in centuries. We are going back to the Middle Ages, with its authoritarian repression and ban on learning, knowledge and experiment.

But now the authority is “science” itself, not the Church. “If you are not with us, you are WRONG and we will have you eliminated.”

It’s childish reasoning. But it is VERY DANGEROUS. Hitler used it to gain power: “If you are not with us, you are against us.” No in-between stance was permitted.

So in the example of vaccine science, you either believe that all vaccines are good, work 100% of the time and have no side-effects or downside whatsoever. Or you are an anti-vaxxer, THEREFORE you are anti-science.

The fact that there is very little science doesn’t influence these Medieval birds at all! To them, their opinion, as with the Inquisition, is all that counts. We are RIGHT, you are WRONG is not science.

Show us what you’ve got, is enquiring science. Well, I dunno… that doesn’t seem to fit with this, is valid science. I don’t agree, is still science. But not, You have no right or permission to think that way. You will be excommunicated, isolated, so that you do not contaminate others with your heresy.

I did not mention it, because it’s cruel and raises all my hackles, but when Bruno was led to the stake, to be burned to death, they had fitted a metal gag in his mouth, so he could not utter anything inspiring, memorable or “misleading”.

I can easily picture Zuckerberg and the Google Big Daddies running to the pile with more brushwood, to burn the heretic.

To harmony and enquiry,