Most of you know, I think, that Vivien and I had a Christmas with family in England (first time in 17 years!) In the heartland of beautiful Cumbria, the British “Lake District”, where I lived before moving to the USA, I was very surprised to find they had, at long last recovered the body of Donald Campbell, the speed ace.

He was killed at the age of only 45, in a world water speed record attempt in 1967. But his body was only recovered in 2001. It had lain at the bottom of Lake Coniston (Coniston Water) for nearly 4 decades. Campbell was finally laid to rest in a quiet churchyard in Coniston village. Vivien and I were moved to find his grave and it stirred mighty thoughts! 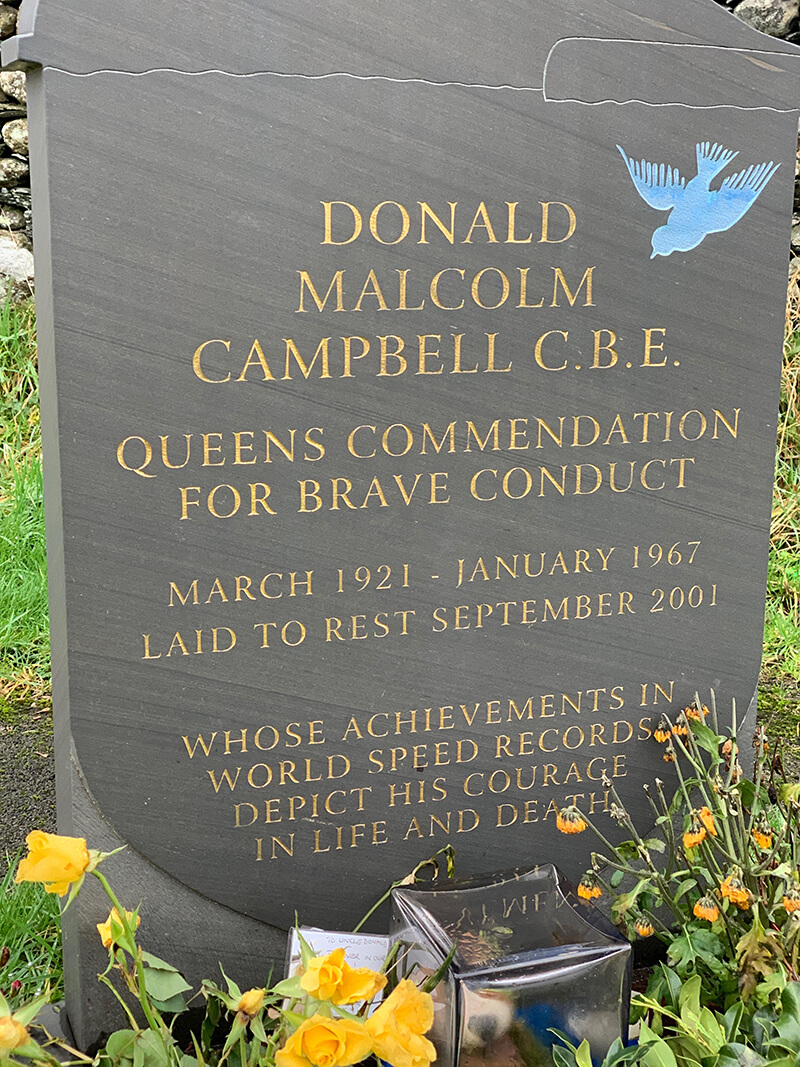 The bluebird symbol was in honor of his speedboats, which had been successively named Bluebird, up to K7, which was his last. K7 was powered by an aircraft jet engine!
Donald Malcolm Campbell, broke eight absolute world speed records on water and on land in the 1950s and 1960s. He remains the only person to set both world land and water speed records in the same year. One of his records was set on Lake Mead, Nevada, just down the road from where I live in Las Vegas!

His final, fatal attempt was to break the 300 mph. barrier (480 km/h). His first run reached a blistering 297.6 mph (478.9 km/h). But on the second run, the boat lifted, spun over and broke up. He was presumed dead instantly. Hitting the water at around 300 mph is like landing on concrete. Later evidence suggested he was likely decapitated. [Wikipedia]

On salvage, the boat still contained fuel in the engine fuel lines, discounting a fuel-starvation theory. The wreckage all evidenced an impact from left to right, wiping the whole front of the boat off in that direction. Campbell’s lower harness mounts had failed and were found to be effectively useless.

The remains of Campbell’s craft was recovered by the Bluebird Project. The project began when diver Bill Smith was inspired to look for the wreck after hearing the Marillion song “Out of this World” (from the album Afraid of Sunlight), which was written about Campbell and Bluebird. Campbell’s body was finally located and recovered from the lake on 28 May 2001, still wearing his signature blue nylon overalls.

So, why am I telling you this?

First, I was profoundly moved, standing at the man’s graveside. I was a little choked, to be honest. It seemed to make the seasonal guzzling and partying a little shallow and silly.

I also tried to imagine strapping myself into a jet-propelled craft, with a heavy premonition of death, knowing that the least slip would be fatal, and I had to admit to myself that I could not have done it.

I have faced death a few times in my career, such as dragging victims from a burning car, disarming a murderous psychopath, tending a crash victim with cars hurtling past mere inches away and being on the wrong end of a gun. But these were instant, unthinking reactions; nothing like the cold-blooded courage that Campbell must have manifest that day.

It started me wondering about courage as a quality. I hope after reading this missive that you may perhaps resolve to do better. We live lives of such unimaginable convenience and comfort that there is sometimes little motivation to do something, just because we would be a better person to do it.

And no, I don’t mean taking risks, whether unnecessary or calculated. I’m talking about things like honoring others, resolving conflict, surrendering our sovereignty when someone needs help and doing what we can to save our environment.

Behaving well towards others does require courage. You have to believe the result will be worth it, if you admit “I was wrong, sorry.”

It requires courage to be the best we can be, whatever the circumstances. Some people are scared of flying; some make themselves do it anyway; others can’t face it…

But what’s the alternative? If you don’t measure up, you know you have failed. You are less of a person than you might have been. It can be hard to feel good about yourself after that. What do you suppose would have happened to Donald Campbell, if he’d announced, “I don’t think I can do this,” and called off the attempt?

He’d probably have ended up a drunk.

An alcoholic is often a person who has failed the courage test, lost his or her self-respect, and taken to drink to hide the misery. There are many other “solutions” that seemed to me, that morning, were simply ways to duck an action that required more courage than the person was willing to invest.

Because that’s how I see it: like an investment balance sheet. How much are you willing to risk on the plus side, to avoid a miserably negative side outcome? It’s a trade off we all make. So much of this and so much of that. But how often is it the mediocrity of compromise?

I urge you to remember the wonderful words of Stephen Spender and his poem which starts: I think continually of those who were truly great.

Even if you are not much into poetry, you must surely see that these lines about men and women like Donald Campbell, who should inspire us to have the courage to be the best we can be (English spellings throughout):

Near the snow, near the sun, in the highest fields,

See how these names are fêted by the waving grass

And by the streamers of white cloud

And whispers of wind in the listening sky.

The names of those who in their lives fought for life,

Who wore at their hearts the fire’s centre.

Born of the sun, they travelled a short while toward the sun

And left the vivid air signed with their honour. 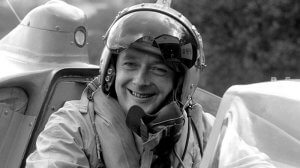 Campbell’s last word were : “I can’t see anything. I’ve got the bows out. I’m going…”
OK, I hope you’ll forgive this seasonal musing, at a seasonal time, and don’t find it preachy. Happy (and Courageous) New Year!

By the way: The current world water speed record is 317.58 mph (511 km/h), achieved by Australian Ken Warby in the Spirit of Australia in 1978. The record is one of the sporting world’s most hazardous competitions. [Wiki]