Bacterial Terrorist Attack, Could It Wipe Out The West? 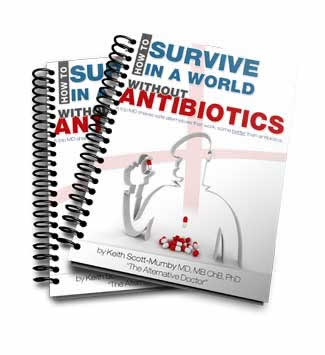 A serious and intelligent correspondent of mine, who has my book “How To Survive In A World Without Antibiotics“, called my attention to a thought provoking piece at WorldNetWeekly (www.wnd.com).

She posed the very reasonable question: can we protect ourselves against possible microbial warfare by Islamic fanatics on a jihad, using the data I have assembled on alternative antimicrobials?

Before I give you my surprise the answer, let me tell you the Hell Fire scenario that Islam fundamentalists are (supposedly) fermenting for the West.

According to an alarming report by an individual who goes by the pseudonym of Reza Kahlili, information has been leaked by a source with knowledge of Iran’s microbial research and development, that Iranian scientists, with Russian and North Korean help, currently possess eight extremely dangerous microbial agents that, if unleashed, could kill millions of people.

The source disclosed that Iran was working on 18 agents, with four completed. The source has now provided information that with work at two other plants, Iran has created a total of eight microbial agents, with research on insects to be used as the vector to infect the societies of its enemies.

The eight agents are anthrax, encephalitis (the blueprint of this virus, Venezuelan Equine Encephalitis, was provided by Venezuelan President Hugo Chavez in an agreement two years ago with the Islamic regime), yellow grain (developed with the help of North Korea), SARS, Ebola, cholera, smallpox and plague.

Let’s take a look at this…

It is claimed that Iranian scientists, with little or no money (but North Korea’s help) have genetically altered the smallpox virus that makes current vaccinations useless against it. Plus, there has been research on insects that can be used as the vector to carry Plague, infamous in former centuries as the “Black Death”.

All this is supposedly “revealed” by an astonishing CIA double agent inside the Revolutionary Guards of Iran and published in Reza Kahlili’s book, “A Time to Betray.”

If these reports are true, the planned microbial attacks will be through various commerce channels and trade with Europe and even through Mexico into the U.S. Moreover, the regime could release the infected insects and small rodents into populated cities, causing an epidemic that could possibly kill tens of millions of people.

According to Clare M. Lopez, a senior fellow at the Center for Security Policy, a non-profit, non-partisan think tank based in Washington, D.C., “The most dangerous biological weapons agents today are genetically modified or even synthetically created in a laboratory in ways that not only make them more contagious, infectious and lethal, but also are intended to defy existing vaccine countermeasures,” and “Among such (biological weapons) agents are (genetically-modified) strains of anthrax, plague and smallpox.”

All very well; but how do we do that? It’s easy to say. But I shall not lose much sleep thinking these stupid, vicious regimes are going to tell Nature what to do.

The real crux is that countries like Russia, North Korea, Iran and Syria are supposed to be using pharmaceutical plants in disguise, as a cover for their evil research. I don’t see it, but maybe it’s true.

And what about delivery? They are said to have that covered too: both Iran and Syria have the artillery, ballistic missile and munitions technology with each other and, likely, with Hezbollah as well, for delivery of such pathogens.

According to what I read, the Islamic regime in Iran has already armed 37 of its ballistic missiles with microbial agents, which upon launch would spray targeted areas as opposed to an explosion. It has also armed cluster bombs with such agents, which could be dropped from fighter jets spraying an intended area.

Much too expensive. Besides, I wouldn’t give much for the chances of a rusting ex-soviet fighter flying towards the USA!

If I was doing this, I’d use free carriers, like fleas, flies, rats and mosquitoes! These have long been recognized as natural vectors for the spread of deadly diseases and that disease-bearing insects have been used in warfare for centuries, perhaps most notoriously by the Japanese during WW II against China, causing the death of hundreds of thousands.

While cholera typically is not fatal if treated quickly, some strains can kill within hours. I got cholera, while in Sri Lanka, helping out after the 2006 tsunami. It can be fast and very rough; but a reasonably healthy individual should survive it. Anyway, I survived 23 hours flight on a jet home to California, with continuous diarrhea, using chardonnay to re-hydrate myself!

I think, as a warfare germ, cholera is a complete wet squib!

Bubonic plague has been the cause of some of the greatest pandemics in world history. In the Middle Ages, it wiped out one third to half of the world’s population. But today it’s lost its ferocity. I wouldn’t choose that either.

Anthrax? Nah, too slow and unpredictable. It’s pretty untreatable but that’s no way to wipe out a population.

Truth is, there is nothing. Even MRSA! Manuka honey will destroy MRSA, faster than it can destroy you.

Smallpox in its day was 90% survivable by healthy people. At its worst, the disease killed an estimated 400,000 Europeans annually during the closing years of the 18th century (including five reigning monarchs) and was responsible for a third of all blindness. Of those infected, 20–60%—and over 80% of infected children—died from the disease.

Smallpox was responsible for an estimated 300–500 million deaths during the whole 20th century. That’s NOTHING. Malaria kills 300-500 million a year (actual figures are very uncertain)!

Towards the end of the history of smallpox (1967), the World Health Organization (WHO) estimated that 15 million people contracted the disease and that two million died in that year. [WHO Factsheet. Retrieved 2007-09-22.] Even that’s only 13%; nasty but not enough to wipe out a population.

So, to me, there is a lot of scare-mongering and not a lot of tenable facts.

However, in our lifetime, the question remains: if some of these psychotic fundamentalist idiots do get lose and do unleash biological weapons, what would we do?

If you follow everything else I teach you: good food, lowered environmental toxins, clean emotional landscape, heavy metal detox, healthy weight and plenty of exercise (just moving around every day), your immune system will protect you from 95% of the risk.

If you were unlucky and got something nasty, many anti-biotic alternatives that I featured in my book “How To Survive In A World Without Antibiotics” will save you, for sure. [LINK]

Give me the tea, any day.

There is hydrogen peroxide therapy, chlorine dioxide protocol, both with outstanding protection results; IV vitamin C and if you can’t get that, liposomal C, where 1 gram by mouth is the equivalent of 10 grams; blue light (surprise!); UVBA; dozens of herbal remedies; essential oils; key vitamins (vit D is well known but I reveal a vitamin with even better protection: 100%, in fact). These few vitamins are the ones I would be sure to take, if I got plague or smallpox.

Then there is homeopathy. Whatever you have heard about this venerable therapy, it truly works and it works miraculously. In the 1948 epidemic of diphtheria in Glasgow, all the children who went to the homeopathic hospital survived, while up to 50% of kids who didn’t, were dying around them.

The fact is there are HUNDREDS of remedies which would block out a terrorist bio-weapon attack. Maybe some people would die; those with weakened immune systems. Then, people with AIDS die anyway, without bio-weaponry: just from poor immune systems.

So… Cheer up and don’t be over anxious. Stay healthy and… ABOVE ALL… get my manual on antibiotic alternatives. You could call it a counter-terrorist medical aid manual!

Don’t wait till anthrax is afloat on the breeze, buy it NOW.

Defend the West against extremist folly! 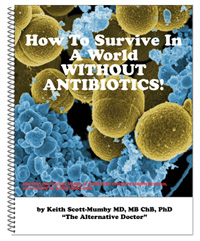 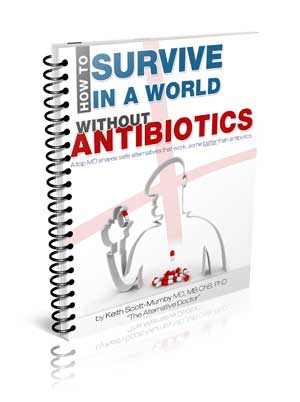 Life Will Always Find A Way